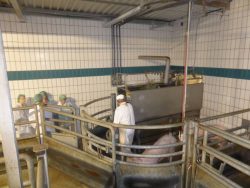 Today we observed the slaughter of pigs at Thoenes Natur slaughterhouse in Germany. This small slaughterhouse specializes in the slaughter of pigs raised under animal-friendly and organic conditions in accordance with their agricultural quality management (Organic and Thoenes Natur). We were interested in visiting this plant because they invented and designed their own system to herd pigs through the single-file chute towards the electric stunners. They designed it according to pig behaviour in order to create as little stress as possible. We were very impressed with this slaughterhouse because indeed the pigs moved in a much calmer manner. This unique design was similar to what Dr. Temple Grandin recommends (using curves to give the animal the feeling of moving back to where he came from) and uses the same principle as the Bud-Box.

Pig slaughterhouses that use electric stunning are often criticized for causing stress when the pigs are moved from a group into the single file chute where they often bottle-neck. However the alternative of using CO2 gas to stun the pigs instead, whereby the pigs can be left in groups, is also not humane because inhaling high concentrations of CO2 is painful and causes pigs to panic. Thoenes explicitly chose not to switch to CO2 for ethical concerns and thus desided to instead concentrate its efforts on improving the electric stunning system. The Thoenes design of herding pigs humanely into the single file chute solves the problem and makes pig slaughter as humane as possible.

This plant only slaughters 110 pigs per hour with a maximum capacity of 175 pigs per hour. For slaughterhouses that wish to process larger number of pigs per hour, this design would still work but they would have to install 3-4 of them. We have never seen such calm handling and easy movement of pigs into the single file. Only one man needed to be in the lairage and he did not use an electric prod. He did not even need to touch the pigs. Just the way he positioned himself and his plastic board within the design was enough to make the pigs move around him and enter the chute on their own. The plant had also installed extra lighting at the end of the chute, easing pigs´ movement in the right direction. Plastic noise dampeners on the hydraulics in the chute had also been installed to limit noise created. All in all the plant was relatively quiet and we did not see any extreme panic in the animals.

We will use this information to educate other pigs slaughterhouses in the hope that some will adapt the same design. As long as there is a demand for pig meat, we see this option as definitely being the most humane option available. We would like to thank Thoenes Natur for being so open and taking such steps to limit the suffering of animals as much as possible. We were also impressed with how transparent they were, allowing us to film everything. They are a positive role model for the rest of the meat industry.