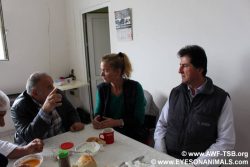 Today we visited Baskent slaughterhouse near Ankara. We had been to this slaughterhouse several times before, to propose improvements. They had added solid side panels to part of their raceway to ease animal handling. Today we returned to inquire about the possibility of them testing out the next upright restraint box of Helmaks. Baskent continues to use the horrible trip-floor box to restrain cattle. In this box, the cattle are forced to fall down, as the floor starts to tilt. A chain is then placed around the leg of the bovine and the animal is dragged out and shackled to have the neck cut. An upright restraint box if well designed, can be less painful and stressful as the animal remains on all four legs. But before Helmaks sells their boxes, we want to be sure it passes the test. Unfortunately Baskent cannot yet say if they would be willing to test the upright box out because it would require 3 days to dismantle their current trip-floor box and build it back up afterwards. Helmaks is willing to give a significant discount to the plant that is willing to test their upright restraint. We will remain in touch about this. 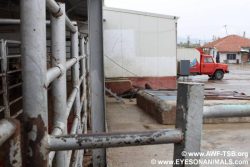 When we arrived at Baskent slaughterhouse, cattle from Brazil imported by Milk and Meat Institute were being slaughtered. They are very fearful of humans and were jumping around in the lairage at the littlest noise. We could hear them moan out while they were being forced to fall and then live shackled to get their throats cut while conscious. At the unloading ramp one bull was found dead. During unloading he was in panic and tried to escape. There was lots of blood at the unloading platform. The neighbour military department shot the bull. The animals had arrived by boat to Mersin, a harbour in the south and then faced a 500km journey by normal truck (not specifically built for live animals, without partitions, anti-slip floor etc…) towards Baskent just for slaughter.