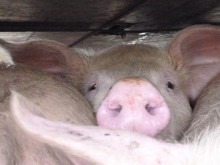 Since December, Westfort pig slaughterhouse has video surveillance to monitor the behavior of their employees towards the animals. Video surveillance in slaughterhouses has shown to have an immediate positive impact on the way employees handle the animals. The employees are more calm and careful and those having a bad day will think twice before letting it out on an innocent animal. Surveillance has also been shown to be a good way of identifying stress points in the design of the runways, pens, stunning and killing area. We will keep convincing more slaughterhouses to do the same! During a visit in November, we already learned Westfort has hired a pig farmer to advise the employees working in the waiting stalls on how to move pigs in a calm manner, using the pigs’ natural behavior instead of prods and force. Also, Westfort followed our recommendations to upgrade the stable where “fragile/unfit” pigs have to spend the day. Floor heating now keeps the temperature at 20 degrees Celcius and rubber flaps have been placed all along the “sick” pen to seal it. Also, a gap above the stunning chamber has been fixed so there is no chance for a pig to get her or his head or limb caught in it. Although a slaughterhouse is never a pleasant place, we appreciate that this plant has taken our advice to alleviate some stress for the animals. 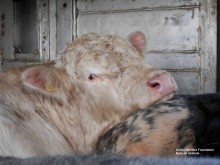 The end of November, inspectors of Eyes on Animals en Animal Welfare Foundation notice a truck standing still in the ‘no man’s land’ between the Bulgarian an Turkish border. Inside are 31 – thirsty and hungry – young bulls. The truck company’s paperwork was not in order, so although the Bulgarian authorities let the driver pass, the Turkish border authorities won’t let him into their country. Normally in such a situation, the animals are left to die a slow and horrible death on board. Luckily our inspectors are present. Our inspectors arrange food and water for the bulls, but still days pass and their condition deteriorates: the poor bulls started their journey in Lithuania on 20 November and are destined to be slaughtered in Iraq. We manage to keep them fed and watered. By pressuring authorities, lobbying at EU-level and inviting TV and newspapers in Bulgaria and Turkey to expose the bull’s fate, Turkey finally agrees to let the truck transit their country to Iraq. The bulls are allowed to be unloaded for 24 hours just over the Turkish border. Our plea to put them down to spare the bulls further suffering was rejected, but at least they could rest… Our team trailed the truck towards Iraq to ensure the driver stopped regularly to give the bulls water and food – until it became too dangerous to follow. Luckily, the Iraqi importer later declared to EonA that this is the last time he will attempt such a long-distance trade. Read more about this. 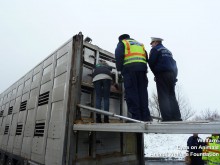 During our inspections at the Turkish border, Eyes on Animals observed many livestock trucks with serious welfare violations coming from Hungary- broken water systems, injured and dead animals, filthy bedding… One of our ideas to end this suffering was to get the Hungarian police involved. If the livestock trucks could be stopped already in Hungary, we could prevent a lot of this suffering! We managed to convince the Hungarian authorities to let us train their police officers (for free). We devised a training with theory lessons on E.U.-laws, with a practical part in which we went out onto the highways to stop trucks together. To be cost-effective and also spread the work-load, EonA joined forces with colleagues from Animal Welfare Foundation and Welfarm. In August, October and December 2012, together we trained roughly 280 Hungarian police officers. During the highway inspection trainings, we showed them how to inspect the trucks and many fines were handed out to truck companies for animals not having enough headspace, being overcrowded and being too hot on board (above 35 degrees). We are proud to have encouraged many more ‘pairs of eyes on animals’. See an overview of all our training sessions of different Hungarian police forces.

Giving a voice to animals during the summer heatwave!

Since the beginning of Eyes on Animals, we have been trying to get the attention of politicians, veterinarians and industry to the suffering of animals when transported in hot weather. We were recently given the opportunity to really grab their attention! The leader of the Dutch Political Party for Animals, Marianne Thieme, joined Eyes on Animals on an investigation during the heat wave in mid-August to see for themselves how the animals suffer. Margreet from EonA guided her and helped the political party capture this concern on camera. The political party is now calling on a ban of live transport for more than 2 hours when temperatures reach 28 degrees. They have produced a short film and are taking the issue to a political level. Finally, it is being talked about and debated in parliament! Watch the video here. 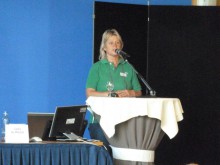 On 14 June a team of Eyes on Animals was invited to speak at the Congres on Animals & Law in Leuven in front of an audience of about 175 Belgian police officers, veterinary inspectors and prosecutors. We gave a presentation on the – unfortunately regular – violations we have observed during the loading, transport and unloading of farm animals. At the end of our speech, participants came up asking for our training brochure and we made many new contacts with local attorneys and police that take crimes against animal seriously and want to get more involved. It was a very stimulating day! A (Dutch) article about our trainings was also published in the national Belgian magazine for police. Read more.

During the year, Eyes on Animals gave several theoretical and practical trainings to the Belgian police in Brugge and Kortrijk on the EU 1/2005 legal requirements concerning Protection of Animals During Transport this year. After the theoretical part, the knowledge was put into practice during joint inspection days of livestock trucks. Several transporters were fined for animal welfare violations, such as not providing cattle with enough head space. Also, one was prosecuted for loading an unfit cow, not able to get up and walk. During the practical part of the trainings, many warnings were handed out to chicken transports that we stopped. The loading had often been done very poorly, with many chickens stuck on their back, and one dead from its head being crushed by the drawer. We hope that by having more random police inspections of livestock trucks on the highways in Belgium and the rest of Europe, we will see an end to the above suffering. Read an account of one of the practical training days here. 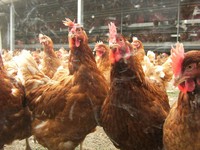 On 29 May, Eyes on Animals met with an official from the EU Directorate-General Health & Consumers to present our concerns regarding the welfare of chickens during transport. Over more than 1 year now Eyes on Animals inspectors, and recently also our apprentice, have been checking on livestock trucks transporting spent hens and broilers to slaughter. In many cases we were shocked by our findings: many trucks had dead, sick or seriously injured birds on board (wings crushed by the crates, heads squashed by the doors…). The design of the different transport containers do not fulfil the requirements of the EU legislation, particularly regarding accessibility to animals during transport (in every case it was impossible to help the injured and dying birds as during transport there is no access to them), avoidance of injury, ensuring safety, and providing adequate headspace. This meeting led to EonA being invited to an EU conference in Dublin May 2013 (see successes 2013) to speak about chicken welfare problems during transport. Eyes on Animals is confident our on-going lobby is placing chicken welfare higher up on the agenda of industry and officials. Read more about our presentation.

EonA stimulates officials from EU and all Member States into action! 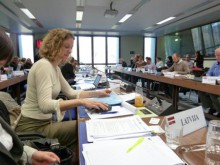 On 12 March, the EU Commission got together representatives from all Member States to come to Brussels to discuss the welfare problems that Eyes on Animals and our partner organization Animal Welfare Foundation (Germany) repeatedly reported during livestock transports from the EU to Turkey and beyond. The purpose of the meeting was for the EU to hear what the different member states had done to help solve the horrible problems EonA/AWF have witnessed. Roughly fifty officials were present and we distributed a summary of the problems and steps needed to make improvements. Member states, in particular from Hungary and Bulgaria, stood up to indicate what steps they have taken since receiving the EonA/AWF reports. We are proud that we have shed light on the suffering of the thousands of animals at this important EU exit point and succeeded to pressure officials to take action! Read more about the meeting.

Decreasing suffering on the export route to Turkey 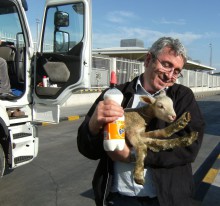 Since exposing the welfare problems of EU animal-transports to Turkey and increasing pressure on border authorities to do their jobs properly, in 2012 we achieved several concrete improvements. *Creation of more small stalls on the Turkish side to unload animals. * We met two terrific private veterinarians that come to treat injured animals at the border. Several transport companies now make use of their services too. * General attitude among officials working at this border is better, taking animal welfare and us more seriously. *The veterinarians at the border now also work until 22:00 instead of 17:00 as in the past. After 22:00 they are now on-call during the night too, should an animal truck arrive and need processing. This reduces the waiting time for the animals on board of trucks. * The Turkish government has announced they have started preparations to adopt EU animal transport legislation. *Animals that have almost reached their maximum EU journey time when arriving at the EU border are now being turned around by Bulgarian officials to first be unloaded for 24 hours before entering Turkey.

Importantly, Eyes on Animals has acquired a Turkish volunteer inspector. Asalet regularly works with us at the border and handles phone calls and lobby-letters to Turkish authorities, speeding up our effectiveness and ability to communicate quickly with the Turkish authorities. This also increases our ability to get the attention of the Turkish media on the problems. 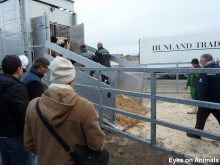 In 2012 Eyes on Animals gave two welfare-workshops to livestock truck drivers. During these workshops we discuss the EU legal requirements, the reason behind the legislation, important factors to check during transport and proper care of the animals. We trained 30 Hungarian drivers that work for the Dutch/German transport company Keus en Mollink. We believe this very important because we found serious welfare problems in trucks of this company in the past, and because they export a lot of animals to Turkey. We were also hired to train 30 drivers of the Hungarian company Hunland. Both trainings were held in Hungary and the second one involved a practical component where an expert evaluated the handling of the animals by the drivers during loading and provided practical tips on how to be gentler and how to improve loading conditions (density, headspace, adequate bedding etc…). We have faith these trainings will make a difference for the animals that are dependent on these truck drivers – they may still be transported but will at least receive more adequate care.

Eyes on Animals has filed an enforcement request with the minister of farming, nature, and food … END_OF_DOCUMENT_TOKEN_TO_BE_REPLACED