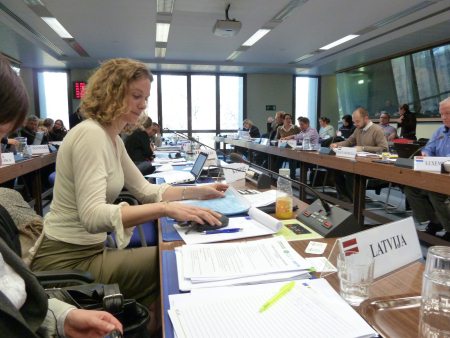 Today a big meeting was held at the EU Commission. Representatives from all EU Member States, involved NGO’s, industry representatives from the UECBV and the Food and Veterinary Office inspectors were present. Eyes on Animals, Animal Welfare Foundation and CIWF distributed our handout with the latest update of the situation at the Turkish border and spoke about the recent improvements and some serious on-going problems.  Several Member States, namely Hungary, Bulgaria, Austria and Lithuania voiced the actions their country took to improve animal welfare, many of which sound very promising. We continued to urge the EU Commission, industry and Member States to communicate with Turkey so that concrete plans for infrastructure at the border, plus clear understanding of import requirements, can be developed quickly. We stressed that it is urgent as we want to avoid horrors like we observed last summer, when animals were left waiting for days on board stationary vehicles in 40 degree weather, and many died from dehydration, hunger, suffocation and exhaustion. We also encouraged industry to do their part, namely by reviewing the professionalism of their livestock drivers and offering additional trainings and welfare-workshops so that the general quality of drivers across Europe is increased. The welfare of animals is always better assured when they are transported by educated and caring drivers who know how to handle stressful situations and care for the biological needs of animals.

Eyes on Animals has filed an enforcement request with the minister of farming, nature, and food … END_OF_DOCUMENT_TOKEN_TO_BE_REPLACED