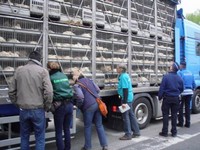 During the practical part of the training, seventeen trucks were checked in the early morning of Monday the 7th. Ten fines were issued: three for animal-welfare violations, two trucks were too heavily loaded, one driver did not have the required documents, there was one case of tachograph fraud and three drivers were fined for road offences.
The police officers were highly motivated and fully involved us in the inspection. They didn’t only pay attention to the presence of valid documents, but also to the condition of the animals in the trucks. We were impressed by the leading police-inspector and his colleagues’ great commitment, we feel honoured having been able to work with them.
Besides traffic police officers two employees of AFSCA (federal agency for safety of the food chain) were present. The inspection was carried out at a traffic post along motorway E17 in Kortrijk. 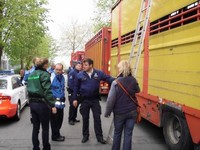 In one of the trucks the cows did not have enough headroom. In the same truck there was also a culled Holstein cow lying down with a rope tied around her hind legs- a sign that she had weak legs. She appeared in very poor condition and her back-left leg was trembling. 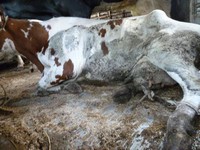 According to EU regulations animals that are not able to stand or walk on their own are not to be transported. Nevertheless this cow was being transported. The vets on the spot consulted the vet at the slaughterhouse where she was destined for. They decided to allow the transport to continue as the slaughterhouse was not far away but asked for feedback as to her condition on arrival. Later our suspicions were confirmed – she indeed was a “downer” and was not able to get up. The police and veterinarian authorities are now in the process of pressing charges. 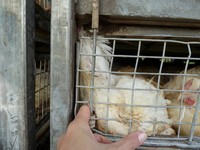 The trucks transporting broiler chickens made a very poor impression. On one truck in particular it was obvious that the loading of the chickens had been done in a very quick and careless manner, leading to serious suffering. The head of one was crushed between the frame and drawer of her container -she had already died a painful death when we observed her. 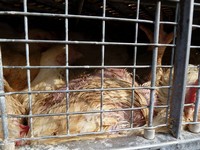 A number of chickens lay on their backs. They were not able to turn themselves right-side up (too heavy as they are selected for large breasts). Because one cannot access poultry during transport (there are no side-access doors), we could not do anything for them. Lying on the back without the ability to move is extremely stressful for poultry. They are completely helpless and many were being trampled by others. 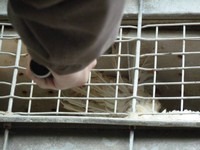 Another chicken on the same truck had her wing caught in the upper part of the container- with some effort we were able to release it. 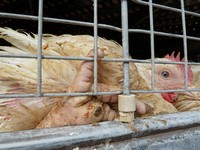 A sad reality of the intensive broiler- chicken world nowadays is that many of the birds develop wounds on their feet which become infected from all the faeces and ammonia on the floor. It is very painful. Numerous chickens had this. It is unbelievable that broilers are only 6 weeks of age when they go for slaughter and already look in such bad condition. The authorities will contact this transport company about the observed problems and issue a penalty.

Thanks to the traffic police West-Flanders a successful inspection took place, at which animal welfare was given precedence. We hope that by having more random police inspections of livestock trucks on the highways in Europe, we will see an end to the above suffering.
We would like to also thank the Dinamo Fond for helping us financially so that we can afford to go to these trainings and make our training material.