Home » Our inspections » Visit to the calf slaughterhouse ESA in Apeldoorn 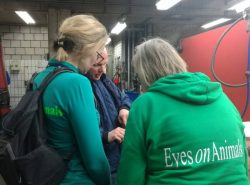 On February 15, 2018, the Eyes on Animals team visited ESA calf slaughterhouse in Apeldoorn. ESA is part of the veal integration VanDrie Group. At ESA 5,000 rosé and white meat calves are slaughtered per week. Our visit was at the invitation of the animal-welfare team within ESA. Their plan is to renovate the lairage, raceway and restraint box – whereby they will apply, among other things, designs by Temple Grandin. They also want to take into account the advice of Eyes on Animals.

ESA uses green light in the holding room, above the raceway and the restraint box. Green light reduces shadows on the floor and has a soothing effect. Use was also made of vinegar on the backs of the calves. This masks the smell of the calves – reducing mounting behavior. Nevertheless, we saw that some calves mounted each other. Mounting behavior is mainly caused by the fact that calves from different herds are mixed together. Calves then have to determine their ranking again. Mounting behavior causes a lot of stress and sometimes also injuries because calves can slip and fall. We therefore recommended keeping calves in their original fixed herds and placing a grid above the holding pens. The latter stops calves from having enough space to jump on each other. We also recommended reducing the noise in the holding room by using plastic gates instead of metal and by placing rubber buttons and slats on the latches. ESA has already begun with a few gates.

ESA used a carousel to guide the calves towards the raceway. A carousel makes use of the natural behavior of cattle, as a result of which bottle-necking before the raceway is minimised. For this reason a carousel is also recommended by the well-known ethologist Temple Grandin. The carousel worked very well at ESA. We did, however, recommend placing fewer animals at a time in the carousel, so that the calves have more space, are calmer and the carousel principle can be used optimally.

Finally, we gave advice on the raceway and the restraint box – where a number of problems in the design caused stress among the calves. This was partly compensated for with good lighting and calm handling of the animals, but modifying the design and colour of the raceway, one will be able to further reduce stress.

We would like to thank ESA for their openness and transparency. We were particularly impressed by the fact that a special welfare team was set up within their company to examine animal welfare in the slaughterhouse and that this team gets the full trust and support of the managers. This animal welfare team made a very motivated and professional impression.

In particular, we would like to thank ESA for the captive bolt pistol that they donated to us today for our work in Ghana. With this captive bolt pistol, we can ensure that a third slaughterhouse in Ghana can start to stun their animals. Most Ghanaian slaughterhouses now (for financial reasons) slaughter animals without rendering them unconscious first- which means a lot of pain for the animals. We want to change this, step by step, with the help of the industry and our donors.