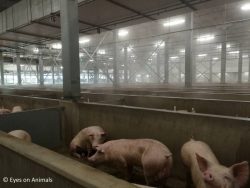 On December 20, 2016, we visited the new pig slaughterhouse Westfort in IJsselstein. Several of our recommendations to reduce animal suffering have been actioned. For example: the lairage is very large so pigs brought to the slaughterhouse can be unloaded immediately and do not have to wait outside in the truck, which is especially good when the weather conditions are very hot, as long waiting times can lead to major welfare problems. In addition, the lairage also has floor heating. The fences and dividers in the lairage and the loading area are partially made of plastic, so sudden noises – which easily scare the pigs – are reduced to a minimum. Furthermore, the pigs that we witnessed being unloaded walked very calmly towards the lairage due to the alleys having smooth turns.

There was a special pen for pigs that arrived with small injuries for example, umbilical hernias and prolapses – as they need to be slaughtered separately. This pen also had floor heating, but unfortunately no bedding. To give these pigs a little more comfort and distraction, we advised the addition of sawdust or corn.

At Westfort, pigs are stunned with CO2. First the pigs are moved to an elevator which is then lowered into a pit with high concentrations of CO2. Westfort has chosen to make these pits deeper than usual, so that the concentration of CO2 at the bottom is very high (as CO2 is heavier than air) and the pigs may become unconscious faster. However, Eyes on Animals is not in favor of this stunning method because it causes approximately 15-30 seconds of extreme panic and breathlessness. The movement to the stunning area also causes stress – this is due to the doors mechanically pushing the pigs. The mechanical doors then reverse over the backs of the pigs, which is very scary for them.

We have not been able to assess animal welfare properly during the mechanical movement towards the stunning area nor the stunning itself because we had to observe it from a skybox. In a skybox you cannot hear the pigs very well, you see less detail, you do not feel the temperature or any drafts and cannot for example, test whether they are properly stunned.

We want to thank Jaap de Wit of Westfort for the tour and the measures they have taken to minimize the stress of the pigs in the slaughterhouse.