Today an EonA/AWF team visited Başkent Et slaughterhouse in Ankara, Turkey. Asalet and Lesley and Dr. Eser, a German veterinarian and expert in “humane” slaughter went to the slaughterhouse to check on the animal welfare conditions during slaughter. Like all other cattle and sheep slaughterhouses in Turkey, the animals have their throats cut without prior stunning.

At this plant the animals were not hoisted completely off the floor by one leg (as sadly seen in other plants) but at least had their head and shoulder on the floor to relieve some of the pain caused by hoisting. The slaughter-man used a sharp knife and was mostly able to make a proper cut to the throat with just one movement. Also the amount of time the animal was partially hoisted was shorter than at other plants, between 18 to 33 seconds. However we found some critical points that need fast improvement.  A truck delivered two bulls and a cow. The animals were chained on the truck but the risk of injury was very high as it was not a special truck constructed for animal transport. It also had no back ramp to unload the animals safely.


The raceway from the lairage pens to the slaughter-box did not have any anti-mounting racks and thus the bulls repeatedly tried to mount eachother and the cow. The cow slid under the weight and fell down once.
Between the ground floor and the floor of the trip-floor box there was a big gap. Two animals got their hind leg caught in this gap while being moved into the box. It was not possible to release the leg of the second bovine and his leg became seriously injured and crushed by the floor of the box. 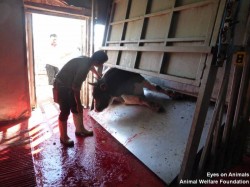 We showed our serious concern for the excruciating pain and fear this animal was in. The slaughtermen reacted correctly and cut the throat of the animal within the box before starting to drag him out, to at least kill him faster and avoid causing further pain.
The slaughterman also knew how to do a chest stick. After we saw the slaughter of the first animal, we asked him if he could perform the chest stick because it increases the loss of blood and thus speeds up the loss of consciousness. Afterwards he performed the chest stick correctly in each animal. It took the first animal, that had only had its throat cut, 107 seconds to lose complete consciousness. The other animals, additionally bled with the chest stick, at least lost consciousness faster, after 48 and 73 seconds. We would like that Turkish slaughterhouses eventually adopt pre-stunning to avoid all this suffering.

The slaughtermen and the technical director of the slaughterhouse were very open minded and friendly. We had a long talk about the improvements they should do and we gave them easy examples of how to fix some of the problems. We made it a point that they need a different restraint box and that the gap must be sealed immediately to avoid these horrendous leg injuries again. They promised to make improvements one by one as fast as possible and send us photographs of their changes. They also want to come to our conference on how to reduce suffering during slaughter in Istanbul this weekend.

Via spreading knowledge and compassion, we hope to be able to quickly reduce at least some of the suffering to the billions of animals being slaughtered in the world.