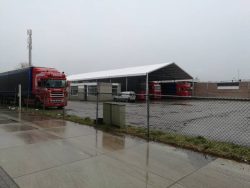 On May 2, 2017 we visited five slaughterhouses: Gosschalk in Epe, Poultry slaughterhouses Remkes in Epe, Jan van ‘Ee in Stroe, Van Bor in Nijkerkerveen and the duck slaughterhouse Tomassen Duck in Ermelo. It involved unannounced visits, which made us run the risk that there was no time for us, and the chance that we would not be welcome. We were willing to take this risk because it is important to conduct unannounced visits to get a true picture of the situation and it is always useful to speak to the managers and workers.

At Gosschalk in Epe, the company manager had no time for us because of another appointment. Later that day however, he sent us a message by e-mail. Hopefully this will ultimately lead to us being welcomed into the plant to check on conditions and suggest ideas for improvements if necessary.

At Remkes, the director was on his way to another branch at the time of our visit. However, when the secretary informed him about our visit, he decided to return and meet us. We had an open and useful conversation about animal welfare during transport, stunning and improvement opportunities. Remkes mainly slaughter breeder-broilers and laying hens. They use a CO2 stunning-system from Anglia Autoflow and certainly see an advantage over the waterbath electrical-stunning system because the chickens don’t need to be shackled while still alive. The director said he would consider a visit from Eyes on Animals to his slaughterhouse in the future. Normally, they are reluctant about visits, but he saw the added value of a visit by Eyes on Animals.

We also spoke briefly about animal-welfare and improvement opportunities at the slaughterhouse Jan van ‘Ee. Jan van ‘Ee slaughtered chickens and, like Remkes, has an Anglia Autoflow CO2 gas stunning system. Jan announced that he had to think about a visit from EonA to his company. At poultry slaughterhouse of the Bor there was no one from managing board at the time of our visit, and we received the contact information of the director.

Finally we visited Tomassen-duck – the only duck slaughterhouse in the Netherlands. We had extensive discussions with the manager about catching and stunning of ducks. Unlike chickens – often caught by the legs – ducks are picked up by the neck. The manager indicated that ducks have a very strong neck. Eyes on Animals would like to see this in practice to better judge the handling. The ducks are stunned by an electric water bath system. For meat chickens, the electric water bath has been phased out for animal welfare reasons because often the shackled animals got pre-shocks or were not stunned adequately. It is often said that ducks cannot be stunned with gas, but research has shown that this is possible. Eyes on Animals would like to talk to Tomassen about the possibilities of switching to a gas system. We would also like to see the stunning of the ducks at Tomassen-duck in practice. The manager informed us that he will discuss it with the director and will soon give us a decisive answer on the matter if we will be allowed in or not.

Eyes on Animals has filed an enforcement request with the minister of farming, nature, and food … END_OF_DOCUMENT_TOKEN_TO_BE_REPLACED