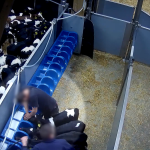 Eyes on Animals and L214 again uncovered physically abusive treatment of unweaned calves coming from Ireland and heading to the Netherlands at one of the two control posts in Cherbourg (France) this year. See footage of 2020 here. Last year in 2019 we did too, at the other control post in Cherbourg. See footage of 2019 here. Irish exporters and Dutch importers, as well as … END_OF_DOCUMENT_TOKEN_TO_BE_REPLACED 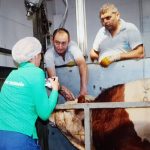 Eyes on Animals' efforts to reduce animal suffering in slaughterhouses in Turkey will be part of a documentary, 37 Grad, to be aired on the German channel ZDF.  https://www.zdf.de/dokumentation/37-grad/37-tiertransport-grenzenlos-102.html Since the filming of this documentary, Eyes on Animals convinced 2 cattle slaughterhouses in Turkey and an influential Religious … END_OF_DOCUMENT_TOKEN_TO_BE_REPLACED 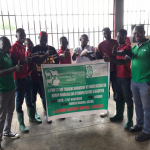 WACPAW and EonA held a practical training for the slaughterhouse personnel and manager of JFamco abattoir in Accra (Ghana). Previously goats were grabbed and hoved onto a table and had their throats cut while conscious. Cattle were tethered, forced to fall down and then had their throats slit. The plant did not have any stunner and bad handling techniques became a habit, … END_OF_DOCUMENT_TOKEN_TO_BE_REPLACED 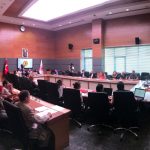 For the first time, a parliamentary commission investigating animal-welfare and animal rights violations and solutions was established in Turkey. They convoked our friend Burak from “Animal Rights and Ethics Association” from Turkey to attend and give a talk. Burak showed several films Eyes on Animals and AWF made of Turkish slaughterhouses and gave a talk about the … END_OF_DOCUMENT_TOKEN_TO_BE_REPLACED 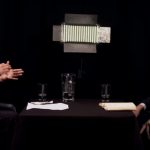 Café Weltschmerz is a media platform where journalists, academics, politicians and scientists meet to have an in-depth conversation about a subject. Café Weltschmerz is known as "slow television". Recently Lesley Moffat, director of Eyes on Animals, was invited as guest to come and talk about Eyes on Animals and the work that the people in the organization do to reduce the … END_OF_DOCUMENT_TOKEN_TO_BE_REPLACED

In a time when the media is reporting often on bad news, making people feel hopeless and depressed, we want to share with you some good news! Three days inside a pig slaughterhouse, making improvements…