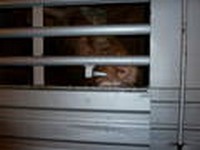 During the week from July 6th to 12th, Eyes on Animals, in conjuction with two other animal welfare partners (CIWF and AWF) carried out an intensive investigation of livestock trucks transporting cattle and sheep from all over Europe across the border into Turkey. This inspection and its´ findings received extensive media attention. Day 1: Late in the evening, in the territory between the borders of Bulgaria and Turkey, three animal transport trucks had to spend the night. One of the cattle transport trucks, from Hundland Company, had a defective water system. There was water via some nipples available, but adult bovine animals can not drink adequately via nipples anyhow as their mouths are too big to fit between the bars and not enough water comes out to satisfy their thirst. Our team consisted of five people who spent the night manually operating the nipples to keep them open for the animals to drink. The cattle were extremely thirsty. There was food available. The other Hundland truck was in order, as was the Bulgarian sheep transport truck, where drivers likewise offered food and drink spection border Turkye.