During the week from July 6th to 12th, Eyes on Animals, together with two other animal welfare partners (CIWF and AWF) carried out an intensive investigation of livestock trucks transporting cattle and sheep from all over Europe across the border into Turkey. This inspection and its´ findings received extensive media attention. 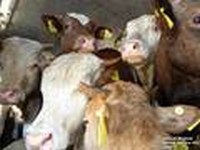 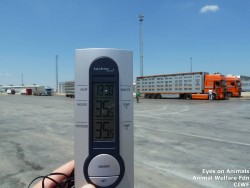 Day 4: In the morning, the teams went to all the places along the border to monitor transport trucks. It was an extremely hot day. We measured 48 degrees inside one sheep transport truck. Everywhere we went, we saw thirsty animals and mostly non or poorly functioning water systems. Some drivers had too little or no food with them. We did what we could and asked drivers to give water to their animals.

In the afternoon we went once more to the exchange point where we had checked a number of sheep transporters. Once more, we found the truck of Keus & Mollink, which eventually began to unload their bulls (15:30). There were six bulls under the 400 kilo Turkish rule, which thus had to be removed from the truck as they were not allowed to be imported further. 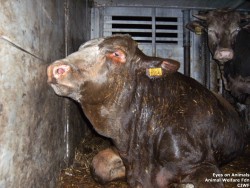 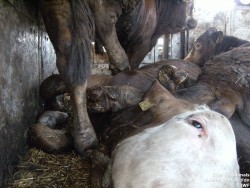 The bulls looked filthy and some were clearly weakened. After fifteen minutes, the rest of the bulls were reloaded without receiving food or drink. The Keus & Mollink truck at this point was filthy and there was no attempt to put some fresh straw on the floor. After strong pressure from our team, the drivers finally laid a little bit of fresh straw on part of the floor. One bull was so weak that he could not stand. 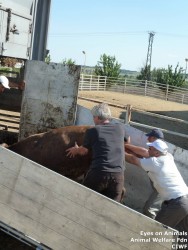 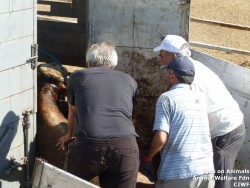 After they had given him water, he started walking up the ramp but was so weak he stumbled and fell down. We pleaded for this bull not to be loaded because of his bad condition. We telephoned the transport company Keus and Mollink and the importer to request that the drivers not load this animal, but to no avail. Eventually, with much pushing, and hitting, the bull was shoved inside. We decided, with two teams, to follow this transport truck to its final destination. Our pursuit began around 18:00.