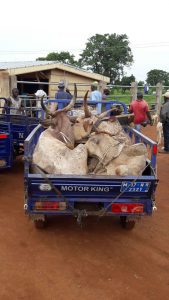 This afternoon we inspected a large cattle and sheep market in Ghana together with our colleagues from the Ghanaian welfare organization WACPAW.  We observed serious welfare problems ; there were many animals too weak or injured to stand with no mercy shown to them, beating during loading, the ramp is not high enough to be level with the larger trucks so most cattle collapse from stress and rough handling while being moved along it and are then hoisted via their tails, horns, ears and body onto the truck. The cattle arrive with all 4 legs tied and their head tethered to the feet so that they take up as little space as possible during transport. When they are finally untied at the market, they have trouble getting back up and are hit, some even have their tails broken on purpose. After the market they are again tied up, and many resist this, in total panic of having to be tied and withstand transport in awkward positions again. The loading density on the trucks is much too high. There is no water or feed on the market or during the often long journeys to and from the market. Most traders holler and run abruptly. Some cattle even are stuffed into the boot of cars. There is so much to improve on. Today the only thing we were able to do was offer some fresh greens to the hungry sheep and offer water to some of the exhausted downer cattle.  We also talked to as many people as possible on the market about how to improve welfare. The managers and some traders know that the situation is not good but putting changes into practice even for them is difficult. WACPAW and EonA will start by trying to get them to build two proper ramps (a high one and a low one, to accommodate the different trucks) and assign a separate calmer area at the market, far away from the chaos during loading, for the weak and injured ones. Euthanasia is impossible to attain here. Only one trader out of mercy killed his downer cow on the market, the rest kick and poke the weak and injured in the hope of still selling him or her. WACPAW and EonA will keep an eye on this market, and do everything we can to get at least some practical improvements into place. Tomorrow we will visit the slaughterhouse nearby where some of the cattle and sheep on today´s market will be killed. They will have gone for hours and even days experiencing extreme stress and no water, food or proper rest.