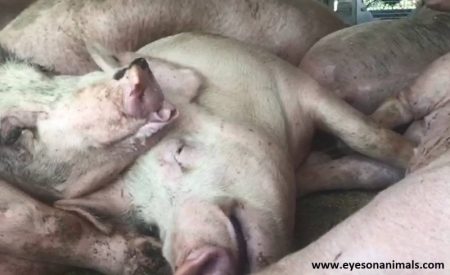 During the July heat wave, Eyes on Animals visited various slaughterhouses in The Netherlands. At many of the slaughterhouses, we saw pigs with (severe) heat stress. The problems at VION Boxtel, one of the biggest pig slaughterhouses in the Netherlands, were the most severe. There were no fewer than 8 loaded pig trucks waiting in front of the slaughterhouse. Another 5 trucks were waiting on public roads nearby. The pigs waiting in front of the slaughterhouse showed severe signs of heat stress, such as panting, very rapid breathing and lying apathetic on the floor. Moreover, the pigs were in the full sun (no shaded areas had been created by VION). There were only a few fans and they were much too small. According to drivers, the waiting times at VION Boxtel in the summer are 2-4 hours. This is completely unacceptable.

VION has let us know that they are unable to enlarge the lairage and number of unloading ramps, because there is a lack of space. Last year VION Boxtel had hired a shed where trucks could at least wait in the shade – but unfortunately this shed could not be properly cooled.

Eyes on Animals has been active since 2016 trying to improve the situation at VION. We are of the opinion that VION Boxtel is not taking the problems during the heat seriously enough. That there is a lack of space is no excuse to tolerate pig suffering. Also, there has been enough time to at least buy more professional fans and create shade for the waiting trucks. Additionally, long waiting lines cause the biggest problems during the summer – but also in other seasons they are undesirable as it is known pigs experience the most stress when trucks are stationary.

VION has promised to inform us in the beginning of 2019 of what measurements they will take to reduce the heatstress during the next summer.