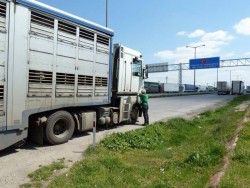 In 2010, the border between Europe and Turkey opened for the export of livestock. Suddenly, we saw dozens of livestock trucks from all over the EU crossing into Turkey on a daily basis. Many had dairy cattle on board, going for further production. But many had European sheep and young bulls on board, destined for slaughterhouses in Turkey. Eyes on Animals together with our inspector-colleagues from Animal Welfare Foundation, spent many weeks at this border crossing inspecting animal welfare.

In October 2010 Eyes on Animals and Animal Welfare Foundation teams decided to trail a livestock truck with Hungarian bulls on board that headed to a slaughterhouse in Hadimkoy, just outside of Istanbul. Our teams were shocked by the way a “ downer” bull was dragged out and left on the ramp. Normally, animals that arrive unfit should be given first-aid immediately or humanely euthanized (either by injection, or stunned and then bled out if the meat is still considered adequate for human consumption). It is then that we learned that unfit animals are never humanely handled, but always forced to go through the normal slaughter process. Animals with broken limbs or serious illness, are live hoisted or dragged by chains into the kill area fully conscious where they then have their throats cut.

One year later, we again trailed a livestock truck with Hungarian bulls on board and witnessed how an exhausted and dehydrated bull was hit and tugged at, to force him to walk out of the truck. He would spend a few days at a feedlot, and then be sent to a slaughterhouse despite his horrible condition. 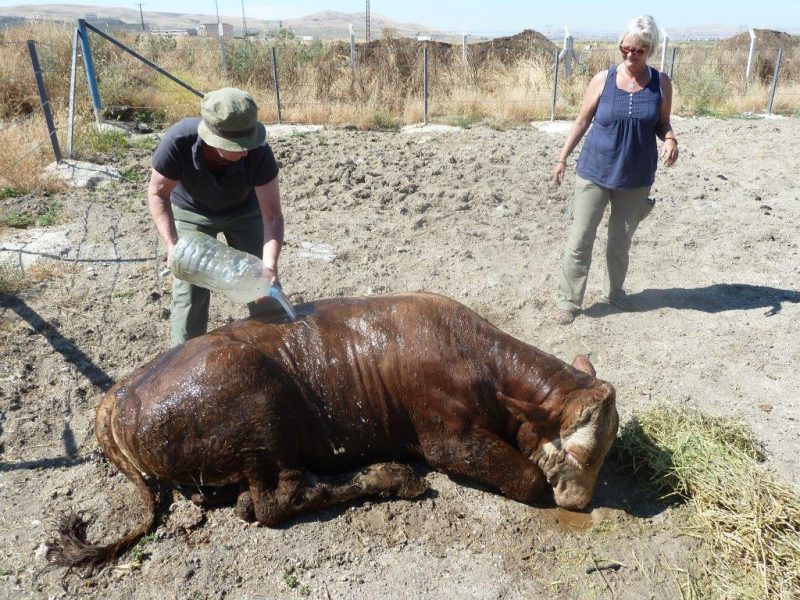 It was then that we decided we needed to spend time visiting slaughterhouses in Turkey, to get a real picture of what was going on, and understand what was needed to reduce the suffering.

Since 2013 we have been inspecting slaughterhouses in Turkey on a regular basis (2-3 times a year, for 12 days each time). We came to the conclusion that most people were not purposefully mistreating the animals, but that they had never seen any different and were lacking knowledge of animal-behaviour and best-practices. We also learned that stunning equipment (to render animals first unconscious) was not allowed by the Religious Authorities in Turkey, thus such things as captive bull pistols were not even available to put unfit animals out of their misery before dragging them into the slaughter room. The design of the lairages, raceway and restraint boxes in most plants was horrible, with animals slipping, breaking their legs, being repeatedly prodded, and live hoisted by one leg up off the floor before having their throats cut.

Our strategy to improve the situation inside Turkish slaughterhouses is based on inspection, exposure, education, advice and regular dialogue. We informed the Turkish Ministry of Agriculture and Religious Leaders of the current problems, advised them on developing first-ever legislation to protect animals at slaughter, we visited and educated workers in the slaughterhouses about ways of reducing stress during handling, and advised Turkish manufacturers of restraint boxes to phase out the trip-floor box and develop restraint boxes in accordance with OIE guidelines. We hosted training seminars in Istanbul and Ankara for meat companies, butchers and veterinarians, published educational videos and brochures and kept the dialogue going with all stakeholders.

We also created a website, in Turkish and English, with scientific information, educational material, practical tips and inspection reports on it. This was a one-of-a-kind platform for Halal slaughterhouses and animal-welfare inspectors to come together. 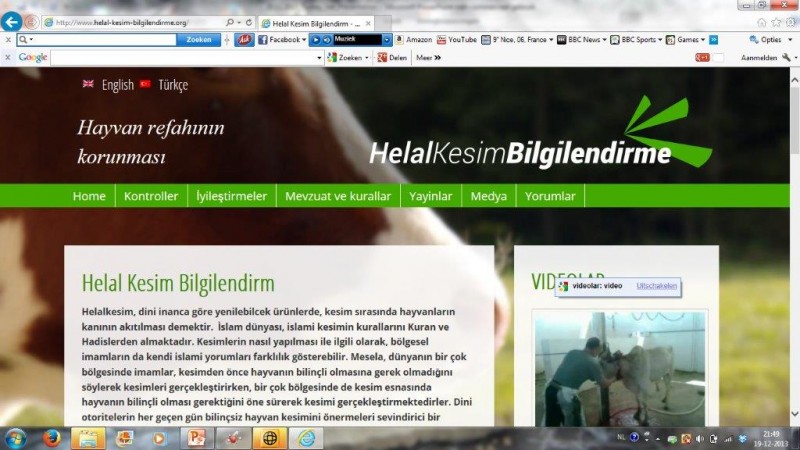