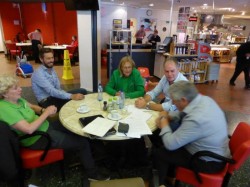 This afternoon we met with the owners of Westfort pig slaughterhouse in the Netherlands. Dr. Gerritzen, an animal-welfare researcher from Wageningen University and expert in measuring suffering at slaughter also joined us. The current Westfort pig plant will soon close and be replaced by a brand new slaughterhouse. The purpose of this meeting, the second one now, was to discuss their plans for their new plant and see if we could influence them a little. Westfort has decided to again go with a CO2 system as a method to stun the pigs, which remains a delicate theme as CO2 is aversive. The CO2 system has the advantage however of being able to keep the pigs in groups and not have to put them into a single file as necessary with electric stunning systems. Nevertheless, moving pigs in groups can also cause stress if not done properly. Together we discussed how to make the design of the hallway, where groups of pigs would be moved, as welfare-friendly as possible – fewer automatic doors per area, more room to let the pigs move forward on their own, and installment of the automatic doors higher or parallel when they swing back in place to not cause fear in the pigs or shadows on the floor making them hesitate. Additionally the floor of the corridor and of the CO2 box to be the same colour to avoid balking. Like at Compaxo, we offered them a bucket of corn kernels to sprinkel on the floor of the lairage pens (as seen at Toennies), to prevent fighting among the pigs and give the pigs something to explore. They confirmed that they will put all these ideas into practice. We would like to thank the owners of Westfort for always being so diplomatic, engaged and open to suggestions.