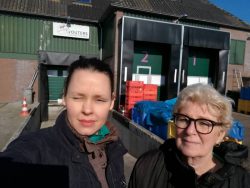 On February 22nd a team of Eyes on Animals visited Halal slaughterhouse Wouters in De Hoef (NL). Wouters slaughters 1000 animals a week, mainly sheep and cattle. Animals are post-stunned. This means their necks are cut when they are fully conscious, but at least further suffering is reduced because directly after their throats are cut, they are stunned.

During our visit we only observed the slaughter of cattle. The movement of the cattle towards the box went quietly. The worker that cut and stunned the animals worked fast and adequate. We gave some  recommendations to reduce suffering as much as possible, like welding a metal shelf at the front of the box – so the neck of the cattle cannot be overstretched during fixation. We also recommended to make the floor of the box less slippery and to reduce noises caused by fences (metal banging) and the radio that was blasting loud music when we were there.

Wouters was open to our recommendations and willing to further reduce suffering. They already worked on improving their box on their own initiative. We want to thank Frans for his time and interest in reduction of suffering.