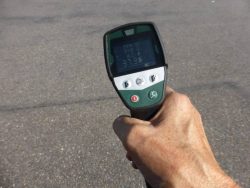 This afternoon EonA paid an unannounced visit to van Miert poultry slaughterhouse in Breukelen. We had dropped by two weeks ago and called to ask for an appointment, but the management directors did not respond to us at all. EonA is trying to have poultry included in the Dutch Animal Transport During Extreme Weather Protocol and wanted to check on the welfare of the poultry arriving during the heat wave to this slaughterhouse and discuss possibilities to limit suffering. The heat regulations this summer so far only apply to cattle, pigs and sheep.

When we arrived at the slaughterhouse we saw piled up containers with broilers inside left in the blazing sun. We measured 37 degrees Celcius. The animals suffered from severe heat stress, they had beaks wide open and panted terribly. Poultry cannot endure such high temperatures. They had probably been waiting in those crates for quite some time, also without acces to water. The worker’s obvious indifference to their suffering is unacceptable to us. With little effort the slaughterhouse personnel could have moved the animals info the shade or put them close to the ventilators that were now too far away from them.

We were told by the security guard that we should have made an appointment before showing up at the slaughterhouse, which we unsuccesfully had tried. We were not allowed to stay on the premise or take any photos. After having been abused verbally and intimidated with the security guard even taking pictures of our faces, our car and licence plate while on the public road, we left. Their attitude was too ridiculous and unprofessional. We will not accept this unfair treatment of leaving birds in the blazing sun nor their defensive and closed attitude and have filed an official complaint to the NVWA (Dutch authorities).