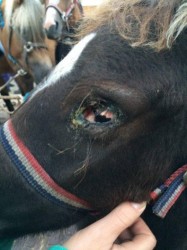 wo teams from Eyes on Animals visited this yearly horse for the first time early in the morning and this afternoon. Unfortunately during the inspection of the first team, between 4.30 and 7.30, neither the NVWA (Dutch government authorities) nor an extra veterinarian were present to be able to check on horses that looked sick and on horses with docked tails. In the afternoon, immediately after the arrival of our 2nd team, the veterinarian hired by the Elst horse market organization and her assistant made a tour of the market with us, which we found very positive. However by this time, most of the horses we had concerns with could no longer be found.
According to the organization, 1375 horses, ponies and donkeys were present. It was positive that from 4:00am onwards, at the two entrances of the market, the organization had hired veterinarians to check the delivered animals. However, we feel that their level of inspection should be stricter. In general, the condition of the animals was good, but there were several animals allowed in that we were concerned about. Two ponies had badly deformed legs and we saw a number of mini- pony foals that were probably too young and in poor condition: twice our morning team observed one of these foals lying down and both seemed to have a fever. The morning team of Eyes on Animals also found a pony with one eye removed from the eye socket, which had pus leaking out and appeared infected.

Eyes on Animals informed the market organization about these animals. The market organization shared our concerns. But since the present vets could not leave their posts at the market entrances and the NVWA was not expected to arrive until 10.00 am, no medical examination could take place. Later in the afternoon the mini pony foals could not be found again and the organization’s veterinarian stated he believed the equine with the missing eye was justly allowed on to the market. 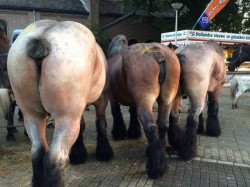 Once again, our team observed horses with docked tails on the Dutch markets. There were three Belgian draft horses with docked tail which EonA estimated were born after 01.09.2001. Since 01.09.2001, the docking of the tail is no longer allowed. Eyes on Animals is very disappointed that the rules of the markets´ own Protocol, in which they forbid the sale of horses with docked tails, is still not respected or enforced. Eyes on Animals will insist that this does happen on the next Elst horse market and the upcoming other horse markets in Zuidlaren and Hedel this fall.
A positive fact was the good distance between the market and the fair that goes with it. There was no loud music generated by the fair to be heard. In the bars though, the noise of the music was quite deafening and there were horses tied up right next to them.

Throughout the market there are double rope-railings to tie large and smaller equines up on to. This double-system needs to change as many larger horses stepped over the lower ropes and risked tripping or getting entangled. Best is to place large horses on high railings, and small horses separately on lower railings.
Horses did panic when they slipped on the wet cobbles of the street. Some sand would do a lot of good here. There was water available and people made good use of filling their buckets and offering it to the animals. Hay was also made available. The amount was initially sufficient but by the end of the morning it was gone.
In general, Eyes on Animals did not notice any abuse or extreme rough handling- nevertheless certain people were seen using unnecessary force on the animals and some even hitting with sticks. The five people of the Export department were doing a good job, handing out water and hay. They were fitted with recognizable jackets and brought calmness in the area where they were.

Though Eyes on Animals has some suggestions for the future, in general this is rather a good market. The organization is clearly willing to continually improve animal-welfare and cooperated very well with the veterinarians and the supervisors (such as us and the Dierenbescherming). Everybody listened and reacted to each other´s concerns about the animals.
Eyes on Animals will continue discussions with Elst market organizers and the NVWA-welfare team to coordinate that the government officials be present at the moment of arrival of the horses, so that the requirements of the horse market protocol and the Dutch legislation be next time thoroughly enforced, with horses showing injuries or docked tails no longer be accepted. Only then will the vicious circle be broken.