Today Eyes on Animals, together with a team from the Animal Welfare Foundation and Tierschutzbund Zürich, met with the Chief Executive Officer from the department of Animal Welfare at the Tönnies Group of Companies.

The purpose of today’s visit was to hold a follow-up discussion with Tönnies from what EonA started with them last January- about the need for more research into a completely new, alternative stunning method, as the current two systems (electric and CO2) both have negative effects on animal-welfare. We also wanted to see what further improvements they put into place since our last visit.
Again we were really pleased to see how engaged the plant has been to do things as correctly as possible to keep suffering and stress to a minimum. Of all the slaughterhouses we have visited, they have taken the most steps. But this is not to discourage other plants, we hope to encourage them to do the same so that animal suffering is reduced in more places. 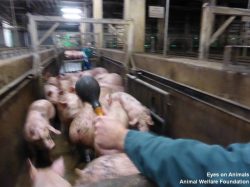 Tönnies has installed coloured lighting in the lairage and raceway that creates fewer shadows and has a calming effect for the pigs. They are thinking of removing the automatic doors in the raceway so pigs are not pushed but let to go at their own pace via trained workers. Electric prods are forbidden and even some of the plastic paddles have been replaced with gourd rattles. The noise created by these gourd rattles is loud enough to make the pigs stand up but soft enough to not startle or scare them. Additionally they are small and thus cannot be used as a tool to hit animals. Like Euro-Meat slaughterhouse in Belgium, they have also installed large speakers in the lairage and play melodious classical and soft pop music on it, that has a positive effect on both the animals as on the workers. To hear the music playing in their lairage, click HERE. 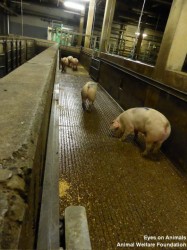 They still sprinkle corn in the empty lairage pens before pigs are placed in them, to give the pigs something pleasurable to distract them with, to avoid outbreaks of fighting but also reduce stress from being in a novel but barren environment (click HERE to watch a short video clip of this). They are also planning workshops in the near future for the pig farmers that supply them with pigs. As Dr. Temple Grandin makes clear, part of the reason pigs are stressed in the lairage pens of slaughterhouses is because at the farms they were not made familiar to novel situations and to people. A good pig farmer is one that walks calmly within the pig pens everyday to get them used to people and action.

As long as slaughter takes place to satisfy the ever-growing demand for meat that is beyond our control, we are pleased about Tönnies’s engagement in animal-welfare improvements and acting as pioneers in new ideas that can reduce suffering and stress as much as possible. We will continue negotiating and facilitating meetings with the right players to hopefully get a new stunning method in place one day soon that does not create the suffering still seen in CO2 and electric stunning systems.