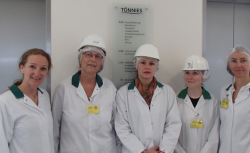 Today Eyes on Animals, together with the German organization Provieh and the Scottish organization Scotland for Animals, held a meeting and visit of Toennies pig slaughterhouse in Germany. Toennies is the largest pig slaughterhouse in Germany and slaughters 17 million pigs per year. Over the years, Toennies has been working on animal-welfare improvements based on advice from Temple Grandin, and several animal-welfare organizations, including Eyes on Animals, and successfully putting them into practice. Toennies has installed camera surveillance, forbids the use of electrics prods and has installed music speakers in the lairage where the pigs have to wait, among many other positive steps. 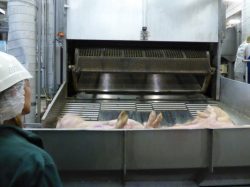 Currently, Toennies still uses CO2 to stun pigs before slaughter, as many larger pig slaughterhouses do. Although the CO2 system can have some advantages over electric stunning, CO2 is an aversive method to stun pigs as it causes breathing-stress and is painful to inhale. Last year, Eyes on Animals suggested to Toennies and V-Cons (a company manufacturing slaughter equipment and working on animal-welfare improvements) to focus on creating a brand new stunning alternative that would not have the negative aspects of CO2 or electric stunning. The studies on an alternative have now begun and today we wanted to receive an update. Toennies informed us that the pilot tests of the alternative will be finished by the end of the summer. If they prove to be successful, they will start building a model to use commercially to test it out in practice shortly thereafter. 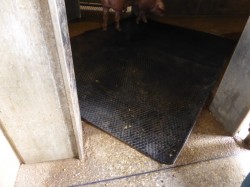 Today we also wanted to discuss and see how Toennies handles “suspect” pigs upon arrival. Suspect pigs are ones that arrive fragile and different from the others. In the Netherlands they are called “Eindlijners” because they are slaughtered always at the end of the line in The Netherlands. This is a concern of ours because, already in a fragile state, they then have to spend the whole day in the slaughterhouse lairage. The Netherlands has this rule to only slaughter them at the end claiming that it is to avoid contamination of the normal slaughter line. Toennies finds this Dutch rule unfounded. At Toennies and in other German slaughterhouses, suspect pigs are immediately stunned and slaughtered. This avoids a lot of prolonged animal suffering. The veterinarian checks if the carcass can re-join the normal slaughterline or should be destroyed. Additionally, Toennies says that “you can never guarantee non- contamination of the slaughterline by separating suspect animals, because even animals that arrive looking perfectly fit from the outside, can have a serious infection inside. So you need an equally thorough check of all carcasses, suspect and non-suspect ones”. Eyes on Animals will confront the Dutch pig slaughterhouses and authorities with this information and we hope to soon put an end to the practice of keeping suspect pigs waiting in the slaughterhouse lairages here.

Eyes on Animals has filed an enforcement request with the minister of farming, nature, and food … END_OF_DOCUMENT_TOKEN_TO_BE_REPLACED