Our team in Turkey had a very rough day today. We returned to Elif slaughterhouse. Despite two concrete improvements they made since our last visit, the handling of the animals is still really bad. The cattle are rushed and stuffed into the raceway by shouting people who also slam the gates. Many of the cattle fall because the floor is so slippery from so much piled-up manure.

The bulls defecate repeatedly in this raceway from the sheer terror they are in. Some bulls became trampled in the short raceway leading to the trip-floor box, because they fall and the others desperate to escape panic and walk over them. Electric prods are used on their face.

During their coffee pause we insisted that they clean the floor of the raceway to prevent further slipping. We set the first example by grabbing the shovels ourselves…What a mess!

During the visit we observed another bull become injured by the trip-floor restraint box (that is used at Elif Et but also almost every single other slaughterhouse in Turkey): again the leg of a bull got caught and became injured. The bull was bellowing out in pain, and then slowly dragged out by a chain around another leg and hoisted to have his throat cut. (We are working hard at getting these restraint boxes phased out here. See this video which explains why they are so risky and bad for animal-welfare). 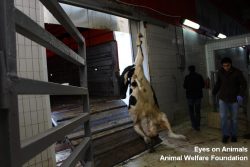 We also observed a truck arrive with a cow in the back with a broken leg. She was not euthanized, or even humanely killed there where she lay, but instead had a chain placed around her leg and she was hoisten out of the truck alive. Her throat was then cut on the ground of the “emergency” slaughter room.

We had a heated discussion with the official and with the private veterinarian of the plant, who insist they do not have much power to tell the people in the plant how to better handle the animals and keep the area clean. Apparently there is more than one boss of the plant and they are rarely present. Plus, the owners of the animals all want to see their animal being slaughtered and want their animal to be first, that is why there is so much shouting in the lairage area. Despite the veterinarians telling them to be quiet and not hang around the area where animals are being moved, they do not listen.

We are going to contact the boss and make an official complaint and consider other tactics to get this plant to improve.

We must nevertheless commend some of the workers who put two of our suggestions from our previous report into practice: 1. anti-mounting racks over part of the raceway ( we would like to see this however above the entire raceway, not just 1.5 metres!) 2. installed new lamps in the sheep slaughter area so sheep no longer moved from bright outdoors to dark indoors.