On March 28 2018 we reported on the first improvements this plant had made in a Good News Part I. We have now received new news from Flanders- they have made further changes that we had recommended to them. 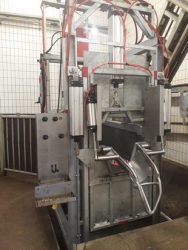 The design of the chin lift has been improved on, so that now cattle enter their heads into it with more ease and less hesitation. 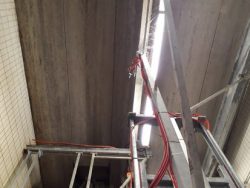 During our first visit we noticed that the restraint box, with all its pneumatic moving parts, created a lot of abrupt and loud noise which really scared the cattle. They have now installed hoses at the pneumatics to redirect the irritating loud hissing sounds from the air pressure away from the box and into another room. The noise volume is now significantly lower.

They welded a sheet of metal to the bottom of the restraint box so that the side wall is now sealed to the floor. Cattle are no longer getting their hooves caught underneath.

During our first visit, the panel used to push the body of the animal out of the restraint box, after stunning, was not working well. It is vital that stunned animals be hung up and bled out as soon as possible, to avoid the risk of them possibly reviving. The fact that the freshly stunned cattle were sometimes remaining stuck in the restraint box, meant that it was taking too long before being able to de-bleed them. At the time, one bovine even had to be cut while still inside the box, which is dangerous and risky for both the animal and employee. This panel and its mechanisms have now been fully repaired. 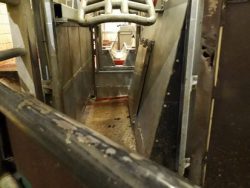 A gap when entering the restraint box resulted in cattle being distracted (they had a view onto what was happening outside the raceway/restraint box) and thus became hesitant to walk smoothly into the restraint box. Each hesitation spreads alertness and fear in the chain of waiting cattle behind. Flanders has thus sealed this gap with a black panel so that the cattle move more smoothly and calmly.

On top of these changes, all of the stunning equipment has been checked and cleaned and the employees responsible for using it have received a refreshers’ training course on their use and maintenance.

The employees have also received training on how to check for signs of unconsciousness in animals, to be sure that each animal is properly stunned before being bled out. There is now a protocol about these checks for all Flanders employees to respect.

We are pleased that Flanders put these improvements into place. Putting better ideas into practice so that the level of suffering and stress can be a little bit reduced!