Home » Our inspections » farm » Visit of an organic Dairy Farm 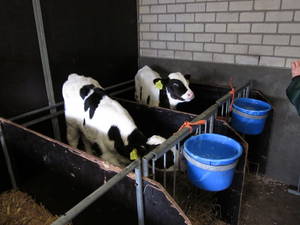 When dairy cows are 15 months old, they are inseminated for the first time. Every 1 or 1.5 years, cows have a calf. Normally the cow has 4 calves in her lifetime on the farm and is then culled for slaughter. After birth, the calf is allowed to stay and suckle from its mother for only one day. The calf is then taken away and put in an individual pen where he or she is hept for two weeks and given milk in a bucket. The calf can no longer drink by its mother as the milk is needed for the consumer. As well, due to genetic selection for high milk-yields, dairy cows nowadays produce much more milk than needed by just one calf, and would develop inflammations in the udder if not also automatically milked. Another reason the calf is separated shortly after birth is that it is “fattened” if left to drink from its mother, thus the consumer would no longer find its meat desirable.

Within three days of being separated from its mother, the calves are put under narcosis to be dehorned (by a burning away procedure) and given ear tags. According to the farmer, dehorning is necessary as it is dangerous to allow the horns on due to not having enough space in their barn. After two weeks the males are taken away to be fattened, and the female calves are placed together in group accommodations. The farmer told us that it took 10 years to change his viably functioning dairy farm into a biological one. It was not only considerations for his cattle but likewise the meadows which needed to meet a specified standard. It is thus for farmers a large and time consuming investment and we are often told that this changeover and running of a biological farm is only possible in combination with other enterprises such as a farm shop, a bed and breakfast (B&B) or holiday dog kennels or horse stables. Biological dairy farms are definitely of value where animal welfare is concerned. Yet, it is sad that biological dairy farmers still separate the calves from their mothers after one day.

We want to thank this particular biological dairy farm for their time and for the proprietors’ extensive tour of their enterprise. We wish them success in the future.

Unfortunately, even on biological dairy farms calves are separated within 1 day after birth.