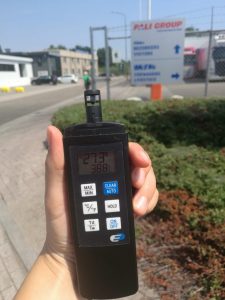 Today we made an unannounced visit to the Pali pig slaughterhouse in Geldrop. When we arrived (13:45) there was no activity. The manager told us that because of the extreme heat all the pigs had already been taken inside before 12 noon. He explained that their pig trucks never have to wait outside the plant. Pali has their own transporters (no external transport companies) and slaughter less pigs than most other slaughterhouses. This makes the planning less complicated.

The slaughterhouse in Geldrop has recently been acquired by Pali. They are currently investing in new equipment and updating the old slaughterline. The manager has invited us to visit his slaughterhouse later this year and give recommendations on animal welfare.

During the heatwave in July 2018 Eyes on Animals visited several medium/large slaughterhouses in The Netherlands. Pali was the first site where we did not observe any loaded trucks waiting outside the slaughterhouse.