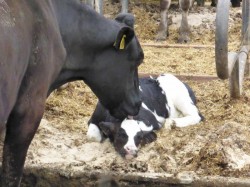 As part of our Dairy Project (“Giving Milk a Good Shake- looking at alternative options in producing dairy”) we visited another dairy farm today. This time an organic one located near Barneveld.
Several years ago the farmer decided to try a new idea on his farm – of keeping the calves longer with their mothers instead of separating them right after birth. He did not have to modify his building or parlour to do so, the new system works fine in what he already had. The first two days he sets the new-born calf with its mother in a separate pen so they have time to be quietly together and the calf can learn to recognize its correct mother. After, the mother and her 3-day old calf are placed with the rest of the herd. The male calves are separated after 2-weeks and sold. The females however stay for at least 5 weeks and often more with the mother in the herd. Thereafter the female calf is not weaned off the mother abruptly, but rather gradually in order to reduce the stress it causes. They are first placed in a large pen with straw right beside where the adults are. The calves can still see, touch and suckle on the mom, but no longer walk freely or sleep among the herd of adults. After a couple of weeks, the female calves are then placed in a pen further away where visual contact is still possible, but no longer physical. At this point the calf has learned to be more independent and the rumen is developed, so the stress is minimal. 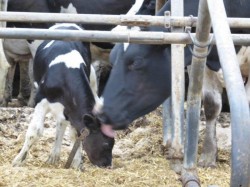 Reasons for keeping the calves longer by the mother? Scientific studies have shown that, if the farmer has a good eye on his animals and professional management skills, the welfare is greatly improved for all animals. No one can take such good care of a young calf as its own mother. Calves have less incidence of infections in the umbilical cord, and develop more healthily and are stronger. The calves get used to a social order among the herd, avoiding the stress that calves raised in isolation the first weeks feel when suddenly placed in a group and then re-grouped regularly thereafter. The cow gets off to a better start in lactation as well when left with her calf. The whole herd benefits, because they can express more natural behaviour- playing, nursing, protecting, social resting etc…
One concern remains however that the male calves are separated earlier.
We would like to thank the farmer for his welcoming attitude and for taking the time to explain the advantages and disadvantages of his system, and sharing his expert opinions with us. He and his farm made a very good impression on us and it is clear that a lot of passion and ethical thought is practiced on his farm.

Eyes on Animals has filed an enforcement request with the minister of farming, nature, and food … END_OF_DOCUMENT_TOKEN_TO_BE_REPLACED