Home » Our inspections » farm » Visit of an organic hatchery, poultry farm and a small slaughterhouse 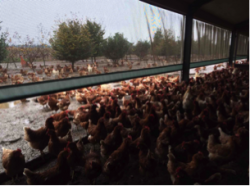 Today we were on the road with biodynamic eggfarmer Joost Slingenbergh. Joost wants to also raise broiler chickens in the near future. But first he is investigating where to buy the broiler chicks, and which slaughterhouse to send them to. He wants to be sure that the broilers are treated as humanely as possible, starting from the hatchery where he will purchase them from, to the slaughterhouse where he will send them to. Currently, broilers raised organically come from the same hatchery as conventional broilers. As well, broilers raised on organic farms are still caught, transported and slaughtered in the same inhumane way as regular birds. Joost wants a different approach and has asked us to think along with him.

First we visited an organic hatchery in Germany. On this farm broiler breeders were kept, broiler eggs laid and hatched. The birds had plenty of space; could go outside and had ample access to straw in which they loved to lie and forage in. One criticism is that the biological breeding hens , just like the conventional hens, are not given food ad lib, but rather have restricted feed intake for the sake of improved fertility. In addition, the chicks are hatched by a machine and unfortunately not by the mother.

For the rest the hens were in an excellent state: they had lovely, healthy feathers and approached us with their natural curiosity. We also visited the slaughterhouse where Joost is considering sending his organic broilers to in the future. We however had to make a follow-up appointment, as no chickens were slaughtered at the time of our arrival. At the end of the day we visited Joost’s laying-hen stable . The hens are raised with access to a large piece of land for foraging and dustbathing. Because of the bad weather today, they preferred to stay under the roof.

We thoroughly enjoyed Joost’s passion and sincere concern for the welfare of the animals he raises. He is striving to not only give them a good life while under his care on the farm, but make sure they come from a humane source and are transported and slaughtered as humanely as possible. We think Joost is a great role model for other farmers!

Eyes on Animals has filed an enforcement request with the minister of farming, nature, and food … END_OF_DOCUMENT_TOKEN_TO_BE_REPLACED