Home » Our inspections » Visit of Dutch poultry farm that burned down 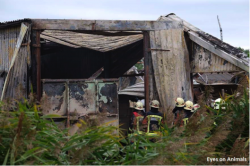 Today we visited the poultry farm in Waddinxveen where yesterday morning a big fire broke out and 60,000 laying hens were killed. One of our inspectors is a specialist on barn-fires and in 2010 had conducted her thesis on the cause of barn fires and the suffering caused to animals. This research led to stricter fire-code regulations in the Netherlands for future new barns being built. However, for already existing barns the same minimum fire safety requirements apply. We spoke briefly with the farmer about the fire on his farm. The poultry farmer was devastated: in just a few hours time his company completely burned down. He said that although he doesn’t know his chickens individually, there are always a few special ones sitting in a flock. ‘For a year and a half you cared for them the best you could’.

The fire started in the back of the barn, where large fans are positioned and the manure is dried. However, the exact cause of the fire remains unknown. There was no indication of a short circuit, but possibly some equipment became overheated. The poultry farmer said that the chickens were very troubled by the smoke. Sadly it was too late to do anything. Because of the enormous heat the fire spread rapidly to other stables. The plastic manure belts likely contributed to the rapid spread of the fire. Unfortunately we were not allowed to look inside the poultry barns. 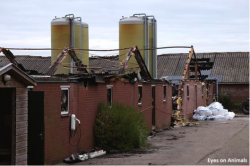 The poultry farmer said he was one of the first egg farmers in the Netherlands with a free-range system instead of a cage system. He likes to take the lead. He was also busy with special lighting to reduce feather pecking and had recently renewed the roof and food silos. He had even heard about how EonA had been trying to stimulate the egg industry to switch to a more humane method of catching and loading hens (the EonA Dutch upright method). In this method of catching chickens, a maximum of two are picked up under the breast and held upright, rather than upside down by their legs with 4-5 at the same time being stuffed into a crate. This avoids a lot of stress and injuries. The poultry farmer found it important that the birds be caught in a humane way, but that most farmers nowadays do not have the money to invest in extra welfare steps because their level of profit is so minimal or non-existent. To get by poultry farms to get even bigger.

In May this year, Eyes on Animals sent a letter to the Secretary of State Van Dam. In this letter we urged for more stringent fire safety requirements to air-vents and washers and that they be applicable to all barns with animals inside, not just newly built ones. We also urged the development of an emergency plan so that firefighters and veterinarians can work as effectively as possible to minimize the suffering of animals after a fire. Often, after a fire, the surviving animals stuck in the burnt buildings have to wait far too long before they can be cared for and/or be euthanized.

Eyes on Animals has filed an enforcement request with the minister of farming, nature, and food … END_OF_DOCUMENT_TOKEN_TO_BE_REPLACED