Early this morning, Eyes on Animals and the French organization, Protection Mondiale des Animaux de Ferme, trailed two livestock trucks coming off the Joline boat at Calais. The Joline boat is an old boat previously used as a tanker and now owned by the Dutch animal trader and transport company “Onderwater”. He bought it so that animals could be again exported from the UK to the continent (regular ferry lines no longer accepted slaughter animals). The Joline has a reputation for not being a very safe boat during rough weather, and thus can only cross during calm seas. It sails from Ramsgate (UK) to Calais (FR) with livestock trucks, and the voyage takes 4-5 hrs. 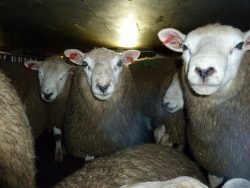 The two trucks we trailed were carrying sheep. After the boat arrived at 4:30am in Calais harbour, it was not until 6am that they finally passed our observation point further down the road. During a brief stop at a gas station we spoke to the drivers and checked on the animals on the lower levels of both trucks. The British driver informs us that his sheep came from his premise, roughly 3 hrs away from Ramsgate. He opened up the sides of the trucks and turned on the lights inside to allow us to better check the animals and photograph them. The water system was full and turned on. On both trucks the sheep were only loaded on 3-levels, thus given adequate headspace. The loading density was also reasonable, however the bedding was on the skimpy side. We also noticed that there was a “lip” on the floors to prevent the legs of sheep getting caught when the floor is being moved up and down.

After trailing the trucks for 4 hours through Belgium, they finally arrived in The Netherlands where both trucks stopped at a rest station along the highway. Here the Dutch importer from LeClerq slaughterhouse arrived in a private car. We were given permission to come to the final destination to watch the unloading. We are told that both trucks will be unloading in fields owned by the importer. We decide to focus on the British truck and follow it to one of the fields. The field was very well-managed and drained, with fresh green grass and no muddy areas, a well protected feeder and waterers. The sheep were all able to walk off on their own and made a healthy impression. The sheep are kept here, with small groups eventually being slaughtered at the small plant nearby, according to demand. The British driver said that he understands why people are against long-distance transport, but that actually the export of sheep from UK to The Netherlands, is shorter than Scotland to southern UK. This trade is also better supervised, because he is obliged to keep the sheep for 21 days at his premise before export and the animals and papers are checked thoroughly by UK Animal Health Services.

We would like to thank Mark from KAALE for helping us gather info on this sailing and thank the importer and driver for being open. A report of our observations will be sent to the EU, Ministry of Agriculture in The Netherlands, DEFRA, KAALE and other NGO’s.