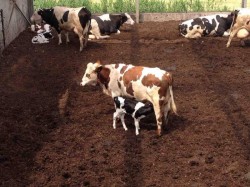 In order to produce more milk for consumers, cows are kept regularly pregnant and their calves are taken away from them within minutes to several hours after birth. The calves then spend several weeks all alone in individual boxes.

The scientific research project run by the Louis Bolk Institute “Calf with the Mother” is following an alternative management system that provides significant ethical advantages. A number of Dutch dairy farmers have decided to keep the calves with their mothers for several months after birth. They believe that it is traumatic for the mother and calf to be separated from each other so quickly, and remaining together is necessary for the healthy social development of all the animals in the herd. On these farms, the calves begin their weaning process from their mothers at 2.5 months of age and complete it at 3.5 months.

The weaning process is done very gradually to ease the trauma. At first they are separated by a see-through fence, whereby they can still have physical contact with each other. Slowly the hours of separation are increased and the fence made more solid. Many of these farmers have also chosen for a mixed-Holstein/Friesland breed of dairy cow instead of using pure Holsteins. A Holstein is a breed of cow that has been genetically selected for producing extreme amounts of milk and as consequence, their bodies go into ‘negative-energy reserves’ after just 4 years, when they become extremely thin and often sick. The Friesland breed produces less milk but is more robust, healthy and calm. Of course, these farmers receive less milk per cow to sell to the consumer but as result the animals have a better quality and more natural type of life. The milk, cheese, butter and yoghurt is sold in Natural Food store under the label “Zuiver Zuivel” from Demeter. 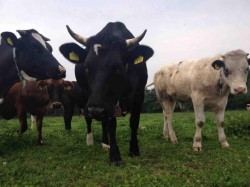 In the scientific literature there are many different conclusions drawn about how traumatic the separation is for cows and their calves and when to best wean them. Having spoken to experts in the field (these Demeter farmers), and having seen their animals and compared this system to standard and even organic dairy farms we have visited, Eyes on Animals feels very strongly that the cow and calf are much better off kept together for a long period of time after birth. Consumers should be prepared to pay a slightly higher price (Demeter Zuiver Zuivel milk is still only €1 per litre!) and show support to this new initiative.

Familiekudde: State of Art. Wageningen UR

The impact of genetic selection for increased milk yield on the welfare of dairy cows. P.A.Oltenacu and D.M.Broom

The effects of early separation on the dairy cow and calf. F.C.Flower and D.M. Weary