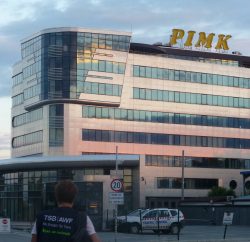 There is one company in particular, Pimk, that has been causing horrible suffering to cattle en route from France, Hungary and other EU countries to Turkey. Their drivers are not rude or mean, but most do not have any experience working with farm animals nor do they understand how the equipment on a livestock lorry works. As a result the animals on board most Pimk trucks are dehydrated, overcrowded, filthy and all too often found dead.
Pimk is the largest truck-transport company in Bulgaria, but only since 2015 has it started to also transport live animals instead of just goods.  We have been regularly in contact with them via email and phone, informing them of the problems we see on their livestock trucks, such as no access doors to give water to the animals manually, overcrowded conditions, bedding that was not thick enough at the start of the journey and is now filthy and wet,  broken and filthy automatic water troughs, broken fans etc… Sadly, the incompetence of many officials working along this route, is such that PIMK has not been forced to learn from their horrible mistakes and negligence. We have offered this company to give their drivers a training course, but to no avail.  Thus today we decided to drop by their main office in Bulgaria to try to get to the end of this matter.

They told us that they agree with us, the quality of the driver is a crucial factor. They have fired many drivers recently because of this. They now have 50 livestock trucks and most of them are new and from Pezzaioli. They now insist to their drivers that they send photos of the animals and the condition inside the trucks regularly to the main office. They expressed their frustration that often they are pressured (by exporters and importers) to overload the animals on the trucks, and the officials do not step in to set things right. If Pimk says no, without the backing of the official veterinarian, then traders will just find another transport company.

We agreed to continue sending them our reports and giving them feedback about their trucks at the Turkish border and behaviour of their drivers. And we again encouraged that they hire Eyes on Animals expert team to train their drivers. They seem to prefer to organize internal trainings at this moment.  We will continue to film and document animal conditions on board Pimk trucks and stay on top of this issue. And we will continue to complain to the EU Commission about the incompetnece of many veterinarians supervising the exports of animals from their country to Turkey.

Eyes on Animals has filed an enforcement request with the minister of farming, nature, and food … END_OF_DOCUMENT_TOKEN_TO_BE_REPLACED