Home » Our inspections » farm » Visit to an organic Pig Farm 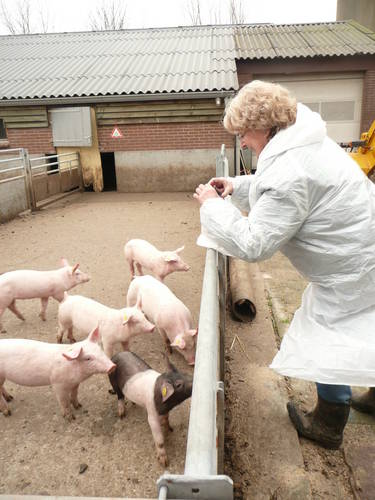 Eyes on Animals visited the biological pig farm De Jofrahoeve in Brabant. This enterprise has 160 sows used for breeding and 1200 pigs raised for their meat. We were given an extensive tour and got a good impression of the differences between biological and intensively run pig farms. The essential difference is that all the pigs, including the ones raised for their meat were able to go outside. The breeding pigs could literally roll in the mud. For the “meat pigs”, due to higher housing densities, the same treatment was not possible, but they likewise had access to very spacious outdoor areas. These pigs were certainly not shy but curious and playful. It was nice to see that all of the pigs had decent coats of hair due to being allowed outside access throughout the winter. Mother sows were enclosed for a few days before and after giving birth and were given straw as nesting material. The piglets remain by their mothers for 40 days, as opposed to the standard 21 days on intensive farms. The piglets are allowed to keep their teeth and tails and were always castrated under narcosis. At the same time the piglets were given their iron injections and ear tags. As these pigs had sufficient space and environmental-enrichment, tail biting was rare. There were no preventative antibiotics given. When a pig is treated with antibiotics more than 2 times, he or she can no longer be sold as “biological” meat afterwards. The biological “meat pigs” are sent to a special slaughterhouse which is not further than an hour and a half away.

It was pleasant to speak to this competent biological farmer but sad that farmers who make a conscious choice to give such care to animal welfare can barely run a financially viable business. 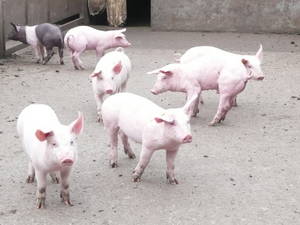 Eyes on Animals would like to thank Frank for his warm welcome and an honest and open discussion. We hope that an increasing number of people who eat pig meat will select biological meat so that Frank and other biological pig farmers can continue successfully with their businesses, and so that more pigs have a chance to this better quality of life.