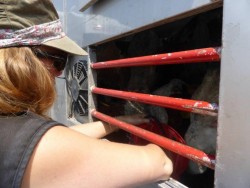 The country of Ireland and the government authorities of Elbe-Elster region in Germany have decided to no longer approve long-distance exports of live animals to hot countries in the summer months of July and August. For years now Eyes on Animals along with our partners from AWF/TSB have been sending reports and videos to Member State authorities and the EU about the horrendous animal-suffering we witness during transport in the summer months, especially to countries in the Middle East and Africa where the temperatures are extreme and there are border and harbour delays. The EU legislation forbids transport if the temperature inside the vehicle reaches 30 degrees Celcius, but Member State authorities still find it challenging to enforce this because when the truck leaves their countries the maximum allowed temperature has not yet been reached. It is good to see that Ireland and Elbe-Elster took matters seriously and intead of waiting for the problems to occur, take action to prevent the suffering from happening in the first place. We hope other authorities will follow in their footsteps and also ban long-distance exports in the summer months.