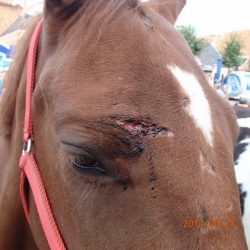 Today Eyes on Animals inspected the yearly horsemarket in Roden for the first time. A few weeks earlier the organizing committee of the horse market (called “Roden’s Public Entertainment”) had contacted us, because they were to take over the organisation from the local authority. Most of the time Eyes on Animals walked through the market together with the Dierenbescherming (Dutch SPA) and kept in touch with the Dutch official inspectors from the government (NVWA).
There were 512 animals present. A bonus was paid-out for every equine that was brought to the market to stimulate traders and horse owners to sell their horses via the market.
While the animals were being unloaded, noise and flashing lights were still coming from the party tent, but after a while this fortunately died down.
The animals were tied on to high and low railings made out of chains. We noticed quite a few horses straddling the chains, which posed a risk for injury and panic. Moreover, they were standing with their front legs on the curb making it very difficult to get them to move back to the right side of the chain.
For some groups of ponies there were loose-housing pens, where they could move around more freely. This type of housing is much better.


Four women were in uniform, given the task to take care of the horses by providing them with water and removing muck. Hay was handed out, but some of the horses were tethered so tightly that they couldn’t reach it. Nor was there sufficient hay. When we walked by with hay some horses desperately grabbed it out of our arms. Obviously the horses were hungry, in addition to being stressed/tired from being tethered and just standing around for so long in a foreign environment. Providing hay can help the animals against the stress and fatigue.

Most of the animals were in reasonably good condition, though we noticed some minor leg wounds and some wounds on the heads. Several horses needed to have their hooves trimmed.
The fair didn’t cause great nuisance, but later in the day there were music-bands playing on the horse-market. Also from the bars around the market deafening music was heard, even though there were horses tied up very close by. Eyes on Animals thinks these decibels are unacceptable when animals are present and will certainly try to come to an agreement with the managers of this market on how this can be avoided next year.

Eyes on Animals has filed an enforcement request with the minister of farming, nature, and food … END_OF_DOCUMENT_TOKEN_TO_BE_REPLACED