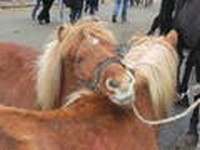 Our Eyes on Animal’s team has inspected the horse market in Hedel again, as we did last year. In 2010, we observed a large number of abuses there. Our observations have resulted in a number of discussions with the organizers of the Hedel Horse Market, the local government in Hedel, the Dutch Ministery of Agriculture inspectors and Eyes on Animals concerning how improvements could be made. The organizers of this particular horse market have adopted several of our recommendations with some good results. The most positive changes we observed this year is that none of the ponies were lifted by their tails nor kicked or beaten (not even once). This is probably due to the visible presence of Eyes on Animals in uniform and official government inspectors, which last year were not present at night. Last year, Eyes on Animals was alone at night. The police, this year, were also given the task of dealing with cases of animal suffering instead of just people issues. There were also private veterinarians walking about checking on the condition of the animals. Another improvements is that there was an abundance of hay, straw, and buckets of water which traders were allowed to make free use of. 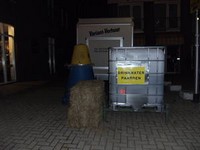 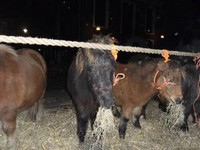 In many places, free hay and water were on offer. Some of the traders took advantage of this free offer on their own, we had to encourage others to do so and also helped distribute hay to the animals ourselves.

Another significant improvement was that the animals were tied onmuch further away from the fair, and that there was a sort of “sound barrier” constructed between where the horses were kept and the loud amusement of the fair games were taking place. There was likewise more space for the animals, so that they no longer had to stand so close together like last year. Sadly, at the end of the day, there was an abandoned and lame pony, left behind by its owner. 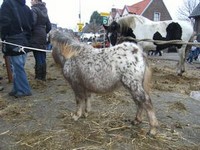 This lame pony was left behind by its owner.

Yet there are some points where Eyes on Animals is not satisfied. The tethering of some of the small horses and ponies was often far too short, so that the animals were prevented from eating or lying down. This matter will be brought forward in our next evaluation with the Hedel horse market organization in line with necessary changes for next year’s market. Furthermore, we were not pleased with the combination of alcohol availability and usage, at times in abundance, in the vicinity of the animals. We observed several incidences of tipsy, drunken people teasing the animals. We will suggest that alcohol not be available in the evening or in the close proximity of the horses. Another point of concern is that a number of horses and ponies had to stand at the market far too long. We observed the last group being reloaded at around 19:00. There were animals in this latter group which we had seen arriving at midnight. This is, in our view, far too long for these animals to be standing at the market. Particularly because many were bought by traders from Eastern European countries, and thus still had a very long journey ahead of them.

Eyes on Animals appreciates the improvements that the Hedel Horse Market Organization has made, which have greatly reduced animal suffering in a number of areas. We wish to commend them for this. The fact remains that Eyes on Animals would like to see an end to horse fairs like this one. The estimated number of visitors, around 40,000 and a fair is stressful for the animals. However much the organization is doing its best to be “animal friendly”, animal suffering in this situation is unavoidable.