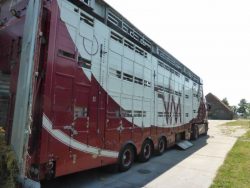 EonA team was out on the highways in the Netherlands today conducting random inspections of livestock trucks. A truck from the company Mondfrans with calves from Lithuania was spotted heading to a veal farm in the east part of The Netherlands. Calves were between 3 and 5 weeks of age. The drivers and farmer allowed us on the property to observe the unloading. Fortunately the calves could all walk off the truck and made a much better impression than other young calves we have seen on long-distrance voyages in the past. Mondfrans had placed lots of bedding, the loading density was lower than seen on other calf trucks, the Pezzaioli trailer had side access doors and there were two drivers. The farmer was open to us and we expressed our honest opinion that we feel more improvements have to made in the calf fattening (veal) sector, as the calves spend the first 2-3 weeks in individual small pens with slatted floors. All they can do is stand, lie down and drink from a pail. Thereafter they go into small group pens, with just a bit more room. More thought has to be put into letting calves express their natural and desired behaviours so at least their life quality is better. We will encourage environmental improvements and more comfortable flooring to Van Drie, the company that produces most of the veal in the Netherlands!