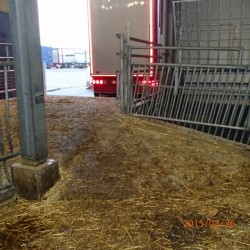 Today two of our inspectors visited the cattle market in Leeuwarden where every Thursday culled dairy cows are sold for slaughter. A number of improvements have been carried out at our request since our last visit in August of 2014 when several serious incidences occurred. First of all, a concrete loading platform has been built so that culled-cows no longer have to climb up steep ramps into the truck. This is of particular importance for the weaker animals that are still allowed for sale. Further, an extra ventilator has been installed to help the animals cool down during summer temperatures and keep the air quality acceptable. The number of holding pens where cows are free to move around rather than be tied on to railings has further been increased. Camera surveillance is being installed at the loading and unloading platforms. Currently there are cameras hanging only above the pathways leading to the loading platforms. Posters from Vetvice clearly demonstrating the differences in body language of sick, as opposed to healthy, cows are now hanging at the cattle market.

There is straw bedding, water and space available for animals’ use; and there’s a mobile milking station which can be used to relieve cows with full udders. The animals are now being moved and loaded in a calm and orderly fashion. During today’s visit we did not see any seriously sick or injured animals. There were, however, some very skinny cows and cows with arched spines, suggesting animals feeling unwell. Some farmers are still selling animals which should have been humanely euthanized back on the farm or at the very least sent straight to slaughter and not first via a market. According to the European legislature, animals fit for sale must be able to stand and walk on their own and be free of pain during movement.

As a result of our last visit, on 6 and 7 of August 2014, when we took photos and footage showing animals in very poor condition being loaded, the market managers insisted that we do not to take any pictures during our current visit or for the next year. To facilitate a good working relationship Eyes on Animals has agreed to honor this request, although we do find it unfortunate. Permission has been granted today to take the photos of the new loading platform.

Eyes on Animals has filed an enforcement request with the minister of farming, nature, and food … END_OF_DOCUMENT_TOKEN_TO_BE_REPLACED