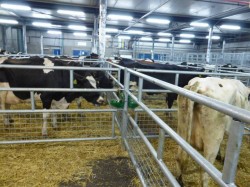 Last night and today we carried out an unannounced inspection of the Leeuwarden cattle market and the loading of cattle onto trucks here. All cattle arriving at this market are destined for slaughter and thus many culled- cows from the dairy industry are present. The Leeuwarden cattle market has taken many steps to improve welfare over the past few years and we are very pleased with the managers- aside from plenty of bedding there are now many more group pens available where animals do not have to be tied up, water troughs everywhere, a mobile-milker to relieve cows with full udders, railings with chains welded on that are well spaced out and long so that the remaining tied-on cattle have enough room to lie down and stand up but without getting tangled in each other. As well, the market has a private veterinarian who is always ready to check and if necessary euthanize an animal that is suffering. In terms of facility and management, it has made the most improvements we have seen compared to other markets. Most of the traders on this day were also calm when moving the animals. 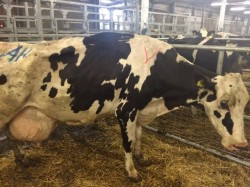 But some serious problems remain in the dairy industry; namely that some farmers and traders continue to attempt to transport culled-cows here that are clearly not fit for transport. These cattle should instead be humanely killed at the farm. According to EC 1/2005 transport legislation, animals must be able to walk unassisted and without pain. Many had swollen or open leg injuries and avoided putting weight on them, others were emaciated with clearly empty rumens, arched backs and hind legs stretched out backwards, and some were breathing rapidly and had cold hanging ears and acted lethargic… thus we argue that a number of them were not legally fít for transport. Unfortunately the trend still is “if she can walk, then she can be loaded” often regardless of her behavioural indications of pain.

On this market, 263 cattle were sold. During our visit the three most extreme cases were emergency killed on the spot (captive-bolt pistol and then bled out) or euthanized (via an injection), and the rest transported to slaughter in Holland, Germany and Belgium. The cow that was euthanized arrived with milk fever and mastitis. Another one was weak and fell down, seriously injuring her leg and no longer being able to get up. 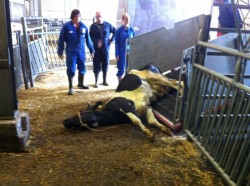 And another one was lethargic and breathing rapidly during the entire market, lying flat-out on her side. The cattle traders present insisted nothing was wrong with her, despite our concerns. But as expected, during loading she collapsed and fell down the ramp. We called the market director who had the veterinarian come who decided to humanely kill her where she was lying, shortly after the incident.

We are now working on how this type of problem can be avoided in the future. Aside from the standard follow-up procedures of alerting the head-authorities of the condition some of the animals arrived in, we will also meet with the boss of the transport company involved in the incident with the collapsed cow to discuss why it went wrong and what actions they will do to avoid such a thing from happening again. Additionally we will insist that the Leeuwarden market now invest in building permanent loading ramps at the market, so that the cattle do not have to climb up steep inclinations into the truck but rather can walk straight in.