Home » Our inspections » Inspection of Bemmel horse market, The Netherlands 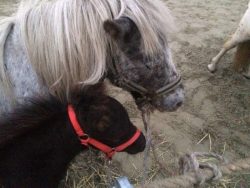 Eyes on Animals inspected the horse market in Bemmel on August 15, 2016. The condition of most of the ponies and donkeys that we saw was good, except for one donkey with a foal that was extremely thin. The relatively large number of young foals on the market is worrisome: their welfare is compromised whilst they deserve special legal protection.

Aside from the fact that foals are very vulnerable during transport, they visibly suffered under the stress of a being at a new environment (a livestock market) and the fact that some had just, or on the spot, been separated from their mothers. We observed that a culture seems to prevail in which people on the market find it normal to grab and twist a ponys’ or foals’ tail if the animal shows any resistance while being handled or if they do something which is considered “wrong”. This is bad – and punishable! We even saw a man kick a foal and lift the young animal up by the tail, while the Dutch authorities from the NVWA were accompanying us. The NVWA immediately distributed an official warning to the man.

There was also a serious lack of water and food available for the equines. Eyes on Animals finds that both the traders and the market organization show no or very little interest in fulfilling the legal obligation to provide the horses with food and water.

Officially the market opens at 03:30AM and finishes at 03:00PM in the afternoon. As is unfortunately common on the large Dutch horse markets, many trailers arrive from midnight onwards. Luckily this year, this was not the case because fewer ponies were brought to the market. We estimate the number of horses present at 06:30AM around 300.

Eyes on Animals will send a detailed inspection report to the market organization, the municipality and to the NVWA. We ask that the special provisions in the EU Transport law applicable for foals and unbroken horses be upheld. Also, traders and transporters at Bemmel should be checked to see if they meet the legal requirements for ‘long journeys’ (> 8 hours). Eyes and Animals believes the municipality should not grant a permit for the horse market, let alone a subsidy, as long as so many laws and regulations are ignored.

See a video impression of the market and the foals present HERE.