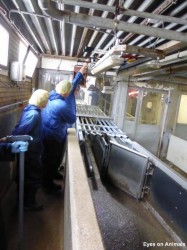 Today Eyes on Animals was joined by Dr. Marien Gerritzen, an animal-welfare researcher from Wageningen Livestock Research Unit and expert on how to measure and reduce suffering during slaughter. Together we visited Compaxo pig slaughterhouse in eastern Holland. The purpose was to evaluate Compaxo’s most recent efforts to improve welfare and exchange ideas and knowledge. Eyes on Animals has been in regular contact with Compaxo since several years, and they continue to make positive adjustments to their plant that lead to a reduction in stress. In the recent past they installed floor-heating in the pen for animals that arrive in a more-fragile state, camera-surveillance at all areas where live pigs are handled, extra-lighting to use the pigs natural behaviour rather than instruments to force them to move etc…  They had already gotten rid of all electric prod usage except sometimes in the area where they have to move the pigs from a group to a single-file. Today they showed us an instrument that they are testing out to replace electric prods at this part. Dr. Gerritzen showed some of Dr. Temple Grandin’s corral designs, that were used at a plant in southern Europe and seem to cause less stress when moving into single-file. We also tested out an idea we learned from a visit at Toennies pig plant in Gemrnay- of sprinkling corn kernels on the lairage floors to reduce fighting among pigs. Slaughter of animals is never a pleasant topic but we are so pleased with the AWO officers at Compaxo that are not only open to knowledge about how to reduce stress as much as possible but also often put ideas into practice. We will continue being in touch with them.