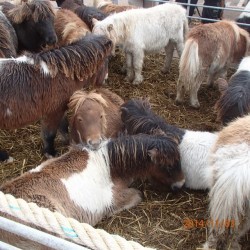 Eyes on Animals was present at the horsemarket in Hedel, November 3rd, with two inspection teams. The first team walked around on the market starting at 1:15 AM. During the first few hours, it rained very hard. Luckily it stopped so the horses, and especially two donkeys who were already present and whose coat is not resistant against rain and who are legally entitled to shelter from rain, could dry up. According to the organization, this year 1136 horses were present – less than previous years. The arrival of horses usually starts at 0:00 am, but probably because of the rain, it did not become busy until early in the morning.

Since 2010, at the request of Eyes on Animals, the market organization has made many improvements, such as the crackdown on animal abuse, making better facilities to tether animals, shielding horses from the loud noise from the accompanying fairground, and offering a greater supply of water and hay.

At night, the Eyes on Animals inspectors walked around the market together with an animal welfare team from the Dutch Authorities NVWA for several hours, so that direct action could be taken in case we saw a suspected violation or a sick or injured horse arriving. Most horses were in reasonably good condition. However, we saw a number of Shetland ponies of which, at first sight, it seemed that the owner had taken good care of by providing them with rain blankets. However, under the covers, the ponies proved to be severely emaciated. When the NVWA managed to trace the owner, it became clear that he was already ‘known’ to the NVWA. 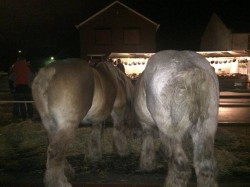 This year, on our insistence, the market organization seriously tried to enforce the rules set down in the Protocol Welfare Horse Markets. One of these rules is to deny access of horses if their tails were docked in the Netherlands after the ban in 2001. We came across two horses with docked tails. A check of the papers showed that one of the horses’ tails had been illegally docked. We informed the market organization and they sent two special investigating officers along with us to summon the owner to leave with his horse. The NVWA eventually gave the owner a written warning because of the illegally docked tail.

After sunrise we saw three more horses with docked tails arrive. These were not illegally docked, but nevertheless, in accordance with the Protocol, the market organization also wanted the two horses that were found to be born after 2001 to leave. However, a very grim atmosphere arose in which a fairly large group of traders tried to intimidate us. Suddenly, a man, Harm van Rossum of the Association of the Dutch Draught Horses, appeared and he went into a heated discussion with the market organization and claimed that the Protocol Welfare Horse Markets was non-legal and the exclusion of horses with docked tails was not allowed by EU legislation.

To avoid further escalation and in consultation with the NVWA and the market organization, it was decided to let these horses stay on the market. Things were becoming too heated and intimidating. Eyes on Animals appreciates the effort of the marketing organization. We are asking a written response from the Ministry of Economic Affairs about these events.

Around 8:30 in the morning, in a parking lot near the market, Eyes on Animals inspectors heard a horse violently struggling in a parked trailer. We opened a side door and saw a young horse had fallen in the trailer and was at risk to strangle itself because of a rope tied around its neck. An Eyes on Animals inspector managed to cut the rope loose so the horse could breathe again. This dangerous situation arose because of the habit many traders have of tying an extra rope around the horse’s neck (in addition to the halter), which they can pull on in order to control a panicky or wild horse (by hurting it). In this case, two hay bale strings were used for this: thin but extremely strong. The new owner had also used this rope to tie up his new horse in the trailer. When the horse fell, the trachea of the horse was cut off. Luckily, a NVWA veterinarian arrived at the scene and could check the horse. The animal had to catch its breath and had some lacerations but there were no serious injuries visible. There is risk of cervical damage after such an accident, but that will be determined later. Eyes on Animals instantly phoned the market organization with the number plate and ask them to call for the owner to go back to his trailer to take care of his horse. We also passed on the number plate to the NVWA and hope that they will trace and penalize the owner for the improper and dangerous tying-up his horse. 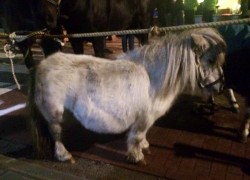 The day shift team of Eyes on Animals had a relatively quiet day. Our team had to intervene once when a Shetland pony was lifted by its tail to force it to walk forwards. And a couple of drunken youths who wanted to climb on a pony were moved away from the animal by the police at our request. The second team did not walk around in our EonA jackets, given the grim and negative atmosphere following the ‘horses with docked tails incident’ earlier.

Watch the video of the horse being rescued from strangling HERE.