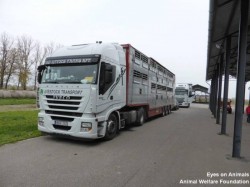 This morning the EonA/AWF team observed the departure of three trucks carrying the German pregnant heifers that had been unloaded at the Vet Express control post near the Hungarian/Romanian border for the required 24-hour rest yesterday. All 3 trucks were being transported by the Hungarian transport company ko-Kavics. The cattle’s final destination is near Konya, Turkey – another 1900km! We checked the loading conditions before they left to see that the drivers had prepared things carefully. There was plenty of fresh deep straw bedding and extra feed was stocked in the swan necks. The drivers had a ladder and water buckets with them and each truck had side-access doors to be able to properly inspect and provide for each animal. 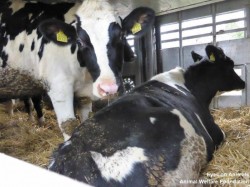 We are still unsure however if all these cattle trucks heading to Turkey will have trouble once arriving at the Turkish border because the EU has declared Hungary, Romanian and Bulgaria as having Bluetongue disease. The control posts Vet Express and Global Horse in Hungary have taken precautions- setting up mosquito nets, applying biofly lotion to the animals and hanging up mosquito zappers inside and outside the barn. The Hungarian officials say that with these extra precautions, the control posts may be used and animals can continue being transported over long-distance journeys via Hungary to Turkey. But we remain concerned because we have seen so many animals on livestock vehicles blocked inside the EU/Turkey border before because of poor communication and health document problems… To date we still have not received a clear response from the EU and Turkey about the matter.
The drivers promise to call us tomorrow to let us know how things go once they arrive at the Turkish border.
Later in the day we met with the owner of Global Horse who currently has several trucks from a Polish company (Amsyl) resting cattle also destined for Turkey. We checked on Amsyl cattle trucks at the Turkish border a few weeks ago and conditions inside were filthy (see photos showing insufficient and filthy truck floor taken on October 17th 2014 of Amsyl trucks). We shared with him our concern about this transport company and asked him to check carefully that the conditions on board the trucks are better this time to handle the long 2nd phase of the journey before they leave his station- enough bedding, feed for the animals and manual water buckets.