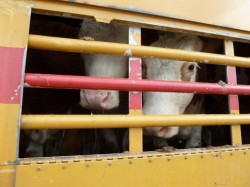 Today our AWF/EonA team checks on two trucks of the company Hefter with pregnant heifers from Germany on board that cross the Turkish border at Kapikule. At the feeding station near the border, the animals are watered and fed with hay, which has been carried along from Germany, but they are not unloaded. In both trucks the bedding is very filthy and wet. The drivers claim to have changed the bedding at a stable in Romania, which is little credible.
In one of the vehicles, the divider between the swan neck and the lower compartment leaves open a big gap, which holds a particularly high risk of injury, as the legs of the animals can skid down and get severely injured. We are going to send a complaint to the competent authorities. Shortly after 7 o’clock in the evening, the two transporters continue their journey, after a waiting time of 10 hours. The pregnant heifers have to travel another 10 hours to get to their destination.