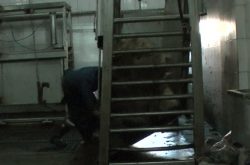 Our strategy to change the world to be more humane to animals is not an aggressive one, but rather one that focuses on education and building bridges of communication. We strongly believe that in certain areas of the world, and in certain society groups, it is often the lack of knowledge about animal-behaviour and intelligence and the lack of awareness about more humane technologies available that are the biggest obstacle to improving animal-welfare. So we educate and spread best-practices and coordinate transfer of information.

Since 2014 we have been giving training courses in Turkey to slaughterhouse personnel and manufacturers of slaughter equipment as well as veterinarians about farm animal behaviour, intelligence and the importance of decreasing suffering caused to animals during slaughter. Helmaks, a large Turkish company that manufacturers cattle restraint boxes for slaughterhouses and sells them all over Turkey and most Islamic countries around the world, was inspired to make a change after participating in our first conference. During this conference we presented a film and explained clearly why trip-floor boxes, found in slaughterhouses throughout the Islamic world and still very popular, were inhumane causing serious pain and fear. https://youtu.be/On-qkoXeKwc. We also showed examples of more humane alternative restraint options that do not require live hoisting and create less panic in the animals. In late 2015 they confirmed that they completely stopped producing trip-floor boxes. Now, they have just finished designing their own upright restraint box, where cattle are no longer forced to fall down nor be hoisted by one leg fully off the ground, but rather remain standing in their normal position before being killed. And now it is not just Eyes on Animals and TSB|AWF educating people in the meat industry in Islamic countries about animal-behaviour and the more humane options available, but Helmaks is doing it too. When their customers request trip-floor boxes, Helmaks explains that these are no longer available and encourage them to instead purchase the upright restraint boxes that do not require the painful live hoisting.

The slaughter of animals is never an easy topic, nor can slaughter ever be welfare friendly. But as long as people continue to eat meat, we are doing our very best to get real practical improvements into place to decrease suffering and change the mentality of people in order to make this world more humane to animals, and more humane to one another.