Home » Our inspections » Eyes on Animals gives a talk at the Organic Food exhibition in Zwolle, NL 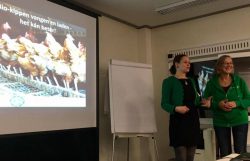 Today Eyes on Animals was present at the Organic Food Exhibition (BioBeurs) in Zwolle, the Netherlands. We were invited to give a talk about how poultry can be caught and loaded in a much less cruel way than the universal current commercial method. We talked about the training course that we developed for chicken-catchers and the recent trainings we held to chicken-catching companies in the Netherlands this past year.

Our training courses for catchers consists of a theoretical and practical part. The theoretical part teaches the biology, anatomy and sensory system of hens and broilers. With the help of photos and videos taken during our inspections of chicken-catching on farms, the class discusses what needs to be improved on. Afterwards is the practical component of the training whereby birds are caught by the EonA Dutch Method so that catchers can learn how to catch birds this way and sense directly the advantages. The current standard commercial method involves grabbing 3-5 birds at a time as quickly as possible, by their legs, and hanging them upside down and then stuffing them into a crate or container. The handling is rushed and birds find being introverted extremely stressful with corticosterone (stress hormone) being greatly produced and heart rate increasing 4-times (to 100 beats per minute). The more humane EonA Dutch method involves catching birds maximum two at time and keeping them upright. The birds are much calmer this way and there is less noise and panic and risk of injury when placed in the crate or container. The EonA Dutch system does take 3 times longer, but having more catchers means one can still be efficient. Welfare should not be sacrificed just for saving time.

We are pleased that several chicken-catching companies in The Netherlands as well as several Dutch organic poultry farmers were willing to give this method and our training course a try , such as Den Ouden Oirschot at a Rondeel farm, where we will be giving a training next week and loading the Rondeel birds together. The first course we gave was to Gemril catching company in Arnhem and thereafter to vd Broek in Renswoude.

We realize that the EonA Dutch method is slower but the extra costs should be able to be covered by the end result- a better quality and more humane product. Although not everyone in the poultry sector finds the EonA Dutch system realistic, we are of the opinion, that there have been other incredible changes made in the livestock-indstry that some years earlier were also thought to not be realistic (phasing out of the battery cage for example). It is a question of changing one´s attitude and of giving it a try. The supermarkets and consumers need to make an effort in this too, by financially supporting just products that are innovative and respect better the welfare of the animals and, in fact, also the farmers.

Eyes on Animals has filed an enforcement request with the minister of farming, nature, and food … END_OF_DOCUMENT_TOKEN_TO_BE_REPLACED