Eyes on Animals joined in an evaluation meeting on the Protocol Horse Welfare Markets that parties drew up in 2011 to improve animal welfare. The five biggest Dutch horse markets have agreed to make obligatory that in bad weather conditions, owners of donkeys have to protect their animals with rain blankets. The Protocol house rule that draft horses with docked tails are excluded from the markets led to a heated discussion. After years of failing to enforce this house rule and an incident where Eyes on Animals inspectors were threatened when an attempt was made to make traders leave with their docked horses, market organizations have agreed to seek legal advice on how to enforce this house rule.

The largest Dutch horse markets -Hedel, Zuidlaren, Elst, Bemmel and Barneveld- have agreed with the Sector Board Horses, the Royal Dutch Society for Veterinary Medicine and Animal to maintain a large number of “house rules” such as supervision by veterinarians, supply of water and hay, noise reduction and so on. This was badly needed, since Eyes on Animals inspectors documented many cases of abuse when they first visited the horse markets. Since then, fortunately, our discussions about welfare issues have led to many improvements. 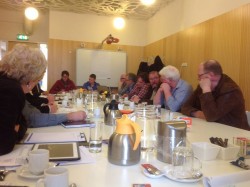 Thursday afternoon, February 12, there was a heated discussion on the admission of horses with docked tails. Legally, the ban on docking is difficult to enforce because Dutch horses can be docked in France, where it is legal. Therefore, horse market organizations play an important role to discourage this unwanted surgery by agreeing in the Protocol in 2011 to exclude docked horses. However, much to our annoyance, Eyes on Animals sees that this house rule is not observed in practice. Finally in November 2014, when the Hedel market organization was the first to enforce the rule, a highly volatile situation followed in which some traders threatened Eyes on Animals inspectors (see report). For safety reasons, it was decided that these traders were allowed to stay on the market. Eyes on Animals believes that market organizations have raised false expectations by their years of tolerance. Moreover, we find it inexcusable that a small minority of traders can ignore the house rules by threatening with aggression. 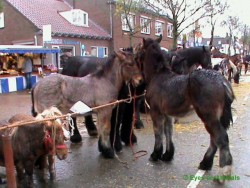 First it first seemed as if this group of traders would have their way: the horse markets proposed to drop this house rule. The fact that the Dutch association for draft horses threatened to sue the horse markets for obstruction of free trade in Europe also played a great part in this. After a long discussion, the horse markets agreed to seek legal advice about this issue before making any alterations. 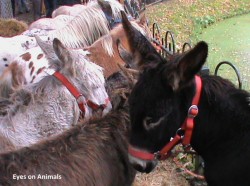 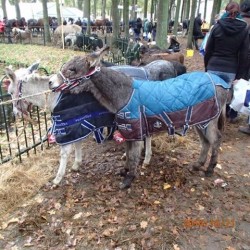