Home » Our inspections » Visit to Westfort pig slaughterhouse in IJsselstein

Today was very hot out so we brought an unannounced visit to Westfort pig slaughterhouse in IJsselstein (NL) to check on the condition of the pigs being brought to slaughter there. We arrived at around noon when the temperature was approximately 28 degrees Celsius. We spoke to the manager and an animal welfare officer of the slaughterhouse and together checked on some of the livestock trucks arriving with pigs on board.

In comparison to other slaughterhouses Westfort has a big lairage (space to house 3200 pigs) with four unloading ramps and 4 truck-cleaning stations, which means pigs arriving by truck can often be unloaded quite fast instead of waiting on board in the heat. Nevertheless at the time we arrived there were 5 pig trucks waiting outside the slaughterhouse as all loading platforms were occupied. The manager explained that it is very difficult to completely prevent waiting times as sometimes many pig trucks all arrive at the same time. Planning is a day job. Some days the planning is met and everything goes smoothly, other days trucks have delays (due to traffic for example) and then too many pig trucks arrive at the same time.

There were trees next to the waiting line, but because of the direction of the sun they did not offer proper shade. The manager told us that the trees provide shade from 13:30 onwards in the summer. There were no industrial mobile fans set up along the waiting line to blow air through the pig trucks. The cement ground under the parked trucks was wetted to decrease temperatures inside the trucks. The floor of Westfort’s lairage is very good- pipes run underneath it with cool water flowing in the summer to keep the floor cool (17 degrees Celsius) for the pigs arriving in the summer heat and warm for the pigs arriving in the winter.

Westfort experimented with spraying the roofs of the parked trucks with water, but unfortunately this idea was not deemed effective in reducing heat-stress. Eyes on Animals explained to Westfort that spraying the hot roofs of livestock trucks, without the use of fans to blow the air off, results in an increase in humidity inside the truck. If humidity levels rise pigs have more troubles releasing excessive heat. 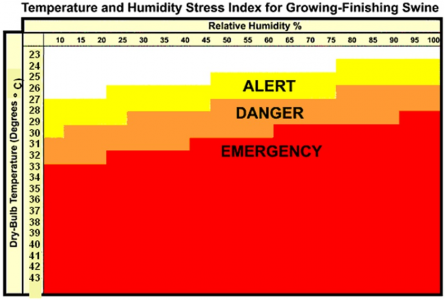 The pigs we were able to check on, that were waiting on board stationary trucks, were in general, showing limited signs of heat stress. However, we did have serious concerns for the welfare of the pigs arriving in a closed livestock truck that used forced interior ventilation. The pigs inside make a very restless and overheated impression (almost all were panting). On the top floor it was 28.8 degrees Celsius with a humidity level of 62%. It is likely that this was even higher before we took our measurements because the driver had opened the loading ramp for us. We also observed heatstress in a truck that had grids in front of the ventilation bars. We have expressed our concerns to Westfort about accepting these two sorts of trucks during hot summer days and will also contact the designer of the trucks. We would like cross-ventilated trucks to also have a humidity sensor (now they only have a temperature sensor).

We have advised Westfort to buy and install large industrial fans to reduce the humidity inside parked livestock trucks so that the pigs waiting on board can better cope with high temperatures. We have also advised them to create shadow for the livestock trucks that come before 13:30 (when the trees do not yet offer shade). Westfort was open to these suggestions.

We would like to thank Westfort for their time and tour around their parking lot.