Home » Our inspections » Visit to duck slaughterhouse Tomassen in Ermelo 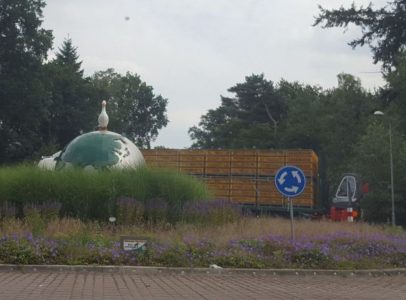 At Tomassen, ducks are stunned with an electric water bath. There is a lot of discussion about this stunning method because the animals must first be shackled alive and the stunning is not always effective. Research shows that ducks can be stunned with increasing low CO2 concentrations. With this alternative method, the ducks can remain in the containers, thus saving them from being shackled alive. Tomassen has indicated that they are not convinced that CO2 stunning is better for the ducks welfare and therefore does not want to switch. However, they are open to advice from Eyes on Animals to reduce suffering in their slaughterhouses.

In the delivery area, animal welfare was considered at various points: there were large fans for the containers to reduce heat stress and a blue light which helps create a soothing effect. The containers were automatically stacked and went onto the production line via a conveyor belt. This process went smoothly; without bumps or sudden movements.

The shackling of the ducks during our visit was done fairly calmly but this procedure still remains a stressful time for the ducks. During the shackling the ducks touched the containers underneath them. We advised that by raising the shackle line or lowering the conveyor belt with containers it would prevent the ducks from being dragged over the containers. Furthermore, we saw that some ducks caught their beak in a groove situated on a bend in the production line. We asked Tomassen to close this groove. Our main concern was that the ducks raised their heads just before they approached the water bath. As a result, their breast comes into contact with the electric water bath first, rather than their head, resulting in the ducks receiving a painful shock before they are stunned. We made several suggestions to prevent this from happening, such as raising the water bath, lowering part of the production line (shackle line with a dip above the waterbath) or attaching a head guide.

We want to thank Tomassen for the tour of their slaughterhouse and hope that they will adopt some of our suggestions.