All day livestock trucks from Europe are entering into Turkey . We observe animals coming from Lithuania, Estonia, Hungary, Germany, Austria and the Czech Republic. We were able to inspect 24 trucks but many more passed by. 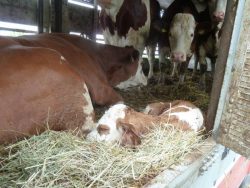 One truck we first saw already on the 26.06 is still there. He finally leaves in the evening (after the animals wait two days straight just at the border). One of the cows gave birth on board. Again this heifer shoudl never have been forced to be transported in the very last part of her gestation. Drivers do their best to take care of the calf but is it dangerous for calves in the trucks. There is a high risk that they will be trampled by the other animals on board.

The outside temperature is 38°C and inside the trucks is 34°C. Some drivers only turn the ventilation system on after our request. They are supposed to have it on all the time in a stationary vehicle at this time of the year.

We inspected a truck at 13:30 coming from Germany with German Heifers inside and we observed that one of them was in the process of giving birth. Two hours later the driver with the help of another man decided to assist the cow to deliver the calf. The rest of the heifers were unloaded in one of the pens at Petline and they reloaded the cow that wass giving birth.

Very carefully they tried to pull the calf from the mother. As this was not working, a lot of men came to ‘help’ and started to pull on the rope that was around the legs of the calf. But there was no sense on doing this and we had to stop them because they were hurting the mother and the baby. We called a veterinarian. The cow was in a lot of pain and we think the calf was already dead. The veterinarian came and checked on the cow and gave her hormones to help her to deliver the calf. But at the end he decided that for the welfare of the mother it was better to do a caesarean. He proceeded, assisted by our own veterinarians, Berker and Tilbe.

The calf was dead and because of all the rough pulling by the men earlier, her uterus was torn badly and she would not recover from the lesions and die within an hour. The veterinarian suggested that the best was to kill her. The importer wanted to salvage the meat and his money, and ordered that she be brought to a slaughterhouse. We protested, there was no way she could be further transported and then dragged out at a slaughterhouse like this. They then called a butcher to come and perform the Halal slaughter on the truck. The cow collapsed on the ramp and then the butcher cut her throat while full conscious, with a back and forth movement several times. Veterinarians in Turkey are not allowed to stun the animals before slaughter or euthanize them. After the butcher cut the neck it took 5 minutes for the cow to completely bleed out and die.

We left Petline to give them some privacy and to take some distance from this traumatic experience.