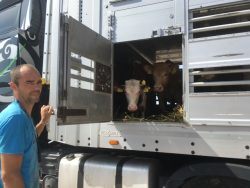 Today our teams have had a talk with the owners of the feeder bulls who have been in stables at the border here for three weeks. They have again asked us to urge the Bulgarian government to allow the animals to return to Bulgaria. The letter about this has been sent in the meantime. We have little hope that permission will be given. Another option is that the animals are sold to Iraq. In order to be able to do this, they first need permission from the countries of origin. If they get it, then the Turkish government must give permission for the bulls to travel through Turkey. This would be in sealed cattle trucks during the whole, more than twenty hour long, journey so that no one may or can have access to the animals. This is also not an attractive proposition. The odds that this will happen are also quite low, which we are not so heartbroken about as it’s a terrible journey in such a sealed cattle truck. A third option is that they “give up the animals” and that customs become responsible for what happens to them. A huge financial blow because the dealers will not get any money. But maybe instructive for doing it differently in the future. The chances are that the bulls will be slaughtered because selling them is not an option as they are not officially in Turkey. You can see,  it’s a big problem. These feeder bulls are in a situation which can only end badly. The owners also asked us to intercede with the 3 countries which they are doing business with and to ask them to no longer send animals in the summer months because animal welfare in the heat is seriously compromised.

In addition, we have also inspected 3 cattle trucks with feeder bulls and pregnant heifers. As the drivers are under the impression that they caring well for their animals, they have no problem showing us everything!
There were few transports today, this could mean that because of the heat, today it was around 42 degrees, no transports were sent. Let’s hope this is the reason.